The end of One Kenya Alliance (OKA) seems to be drawing near after two bigwigs have been alleged to have finally agreed to back Raila’s presidential quest. 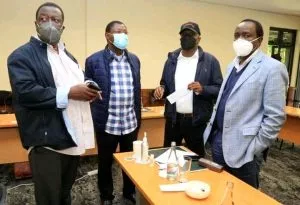 According to a publication by the local dailies, it has been established that at least two principals have shelved their presidential ambitions suggesting the demise of the outfit even before it’s inauguration.

According to insiders, Kanu's boss Gideon Moi has said he would not mind working with Raila Odinga and spearheading his state house bid in the upcoming 2022 polls.

Wiper’s Kalonzo Musyoka is also deemed to have succumbed to the pressure but fears criticism among his allies who have threatened to forsake him if he reinforces the former premier.

The threats stimulated speculations that the two heavyweights could be sketching a reunion to face Deputy President William Ruto on a joint ticket.

Conversely, ANC party leader Musalia Mudavadi who has been traversing several parts of the country to hunt support for his bid to succeed Uhuru Kenyatta has maintained that he will be on the ballot in August next year.

He has in many occasions insisted that he has played second position to others and it is now time for him to be supported by the same people he has been reinforcing.

OKA partners belonged to the dismantled National Super Alliance Coalition (NASA) that had ODM leader Raila Odinga as their Presidential flag bearer in the 2017 general elections.

It is also reported that Uhuru Kenyatta is committed to ensure that the OKA principals join forces with Odinga so as to share up numbers and increase their chances of success in the forthcoming vote exercise.