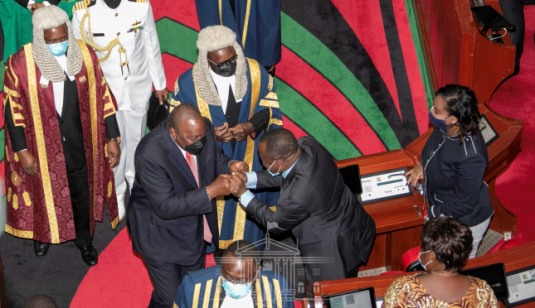 Kenya economic growth is on the upwards and today it has moved to number six from 12.

President Uhuru Kenyatta made the revelations today Tuesday November 30 during his last State of the Nation address held at the Senate chambers.

He disclosed that when he was taking over in 2013, Kenya had a GDP of 4.74 trillion but today it is at a whopping sh 11 trillion.

“We have managed to multiply what was bequeathed to us, in just 8 years my administration has multiplied the GDP by a factor of 2+,” Kenyatta said in the speech.

According to the president, the 2013 GDP was an accumulative figure for over 123 years including the colonial era.

“Today as we speak our GDP stands at sh 11T up from sh 4.75T and from being ranked 12th when I took over we have now moved 6 ranks to become the 6th wealthiest nation in the continent.

“I’m happy to report to this parliament that we have multiplied our critical fundamentals in ways that even I did not imagine possible,” Kenyatta stated.

Uhuru confirmed that ICT industry was growing very fast and steadily to become a beacon of hope for the country.

The President also spoke on the potentially more contagious variant which had been discovered earlier this month in South Africa and Botswana, and said currently a total of eight southern African countries have since been placed under travel restrictions. These countries are – South Africa, Botswana, Eswatini, Malawi, Mozambique, Namibia, Zimbabwe, and Lesotho.

He asked citizens to continue taking serious the Covid-19 health protection measures so that to avoid any more risks that could force the country into more lock-downs. He emphasized the importance of vaccinations.

"I Once Got Physical With Papa Shirandula" Njoro Shirandula Reveals [Video]