By Kenyapress (self meida writer) | 27 days 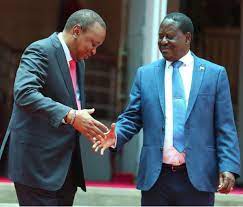 In 2018, Kenyans woke into a new dawn of two great political enemies who were willing to bury their differences and work on uniting Kenyans. Many Kenyans were amused by this move, while some termed the move as personal and full of malice. Today Kenyans have been met with another rude shock after the Orange Democratic party threatened to revisit their union with the jubilee party following today's Bomachari by-election.

According to the orange national chairman, the Bomachari by-election could be the beginning of an end of a perfect marriage between the ODM party and the jubilee government, following what he termed as serious frustration to their candidate by the government. While speaking today, the national chairman Hon Edwin Sifuna promised to have their union revisited. Sifuna also narrated how he and the Kisii woman representative were forced to play a cat and mouse games to avoid being arrested during the much-contested by-election

"If things continue this way, we will have to relook at our partnership with jubilee to establish we take her it is a genuine or a fake union. We want an equal playground for all contestants. We will not accept to be in partnership with parties like Jubilee yet they are using state resources to undermine us" Said Sifuna

Do you think this is the end of the handshake? Send us your opinion on this.

Content created and supplied by: Kenyapress (via Opera News )

What a Sad Day; Kenyans Mourn This Popular Politician Hours after the Death of Chris Kirubi

Dark Monday; List Of Influential Prominent Leaders Who Have Left The Country In Agony Today

How DP Ruto is Benefiting From a Pre-Election Deal With Uhuru, Political Analyst Claims

Ruto Ally Accuses Uhuru of Show Off, Reveals What He is Planning to do to NASA Alliance Before 2022