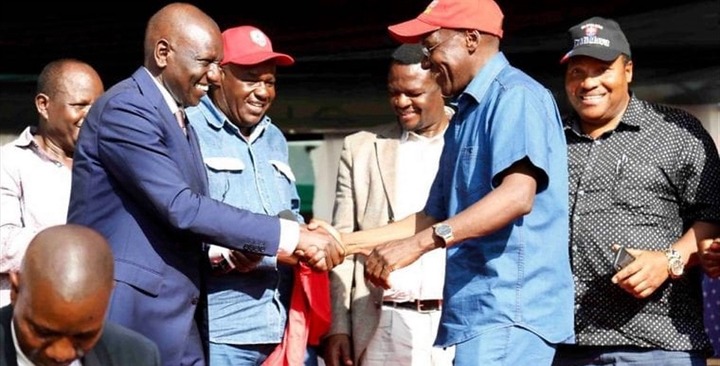 Former Kakamega senator Bony Khalwale has told President Uhuru Kenyatta and His allies to the challenge and Name Deputy president William Ruto as the Head of State immediately urging that He is the most popular person, according to some polls taken recently on social media.

Speaking today during a media briefing at the UDA Headquarters in Nairobi, Khalwale said that Ruto alone has 44% support from Kenyans compared to Raila Odinga who has 14%, Kalonzo and Mudavadi 3%each and Gideon Moi 2% respectively.

He therefore said that Uhuru should accept defeat early enough and organize for the power handover immediately to William Ruto even without elections because He is the leading Candidate in the race. The former Mp also advised Raila and His allies to stop wasting their money in Campaigns because they will not defeat Ruto.

"We recently conducted a poll on social media and Kenyans decided for themselves. The results showed that Ruto had around 44% followed by Raila Odinga who has 14%, Kalonzo and Mudavadi with 3% and Gideon Moi with 2%.So even if they combine their votes, they will ever come close to Ruto. So basically, Raila and His allies should do themselves a favour and stop wasting their money in Campaigns and urge Uhuru organize a smooth transfer of power to Ruto immediately even without holding elections. "Khalwale says.

Hon. Khalwale extended His attacks to Uhuru saying that the leaders in developed Countries usually resign if they fail to deliver to their people and He should also step down. He gave examples of United Kingdom Prime Minister Hon. Cameroon who tried to remove great Britain from the Brexit Economic block but later resigned after failing terribly.

The former lawmaker also added that Once Uhuru resigns and paves way for His deputy to lead the nation, Ruto will take the BBI document and implement some of the aspects in it that were meant to help Kenyans.

"We have been borrowing alot from the developed Democracies and even the UK. Some of their Prime Ministers resigned after failing in delivering services such as the Brexit deal where Hon. Cameroon stepped down paving way for Boris Johnson. Uhuru should also do the same to make Kenyans believe that He is a BBI supporter. Once Ruto gets to Office, We will bring back the BBI and choose some sections that will help Kenyans and implement them. "He added.

The Tangatanga Politician lecturing The head of State following the recent back and forth that involved Him, an the problems that are facing the Nation since Uhuru Kenyatta assumed power in 2013.

Most Legislators have been faulting Uhuru Kenyatta while telling Him to stop insaulting Ruto and instead beg for forgiveness from Kenyans for bringing Raila Odinga into the Government through the handshake deal that saw Ruto being thrown out of the government and His responsibilities being taken away.

Ruto however remains the Candidate with the highest number of supporters in the Country, even as Raila is considered as one of His tough competitors. You can click on the link below to watch Khalwale video.