Much has been said about Kalonzo Musyoka's son appointment into the East African Legislative Assembly by the Wiper Democratic Movement party. To clear the doubts and hearsay, Kennedy Kalonzo spoke to TV 47 in an exclusive interview and disclosed his struggle into the EALA Parliament.

Contrary to what politically active Kenyans and analysts have alleged in the past, Kennedy Kalonzo disclosed that he fought his way to EALA without his father's assistance in whichever manner. Kennedy said that he was well raised up by his father and studied law hard/well enough to earn such a job. 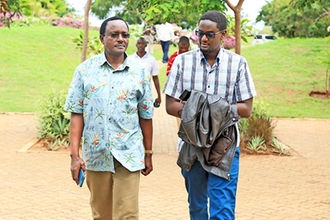 "It was not a walk in the park as many think, it began from the party then defending yourself before Parliament that you're equal to the task," said Kennedy. He however admitted that due to Kenya's political environment , the 'mtu wetu thing's' it was not easy for him getting past Parliament.

He asked patriotic Kenyans to shun away from such allegations and keep praying for their leader everyday.

Kennedy's appointment into EALA was a setback for the Ukambani kingpin Kalonzo Musyoka, the appointment was followed by a series of attacks and finger pointing from Kenyans/critics who thought Kalonzo used his power to lobby for his son's appointment.