Once Ruto is sworn as the 5th President of the Republic of Kenya, he will immediately form the government and appointing various cabinet and state officials. It is not a new thing that heads of state always consider the people that were key in making them win the elections, and Ruto is not an exception.

His first consideration when appointing cabinet members and other officials will be the people who contributed to his win. This analysis also considers Ruto's promise to his allies during nominations about awarding them state positions if he occupies the house on the hill. Below are names that will likely feature Ruto's government and why they might be there. 1. Musalia Mudavadi - Mudavadi has a pre-election pact with Ruto. He is likely to be the finance minister.

2. Alfred Mutua - Just like Mudavadi, Mutua also had a pre-election pact with Ruto, and it is beyond doubt that he will feature in Ruto's government.

3. Moses Wetangula - Despite Wetangula winning the Bungoma senatorial seat for the third time, he will likely have a role in Ruto's government besides being a senator because he also had a pre-election agreement with the president-elect.

4. Aisha Jumwa - Her decision to stand with Ruto in a zone perceived to be Raila's stronghold made her lose the Kilifi gubernatorial seat. Therefore, Ruto is likely to consider her when forming the government.

6. David Ndii - He is a pivotal member of the bottom-up economic model, and he will be in that model should it be adopted by Ruto's government. 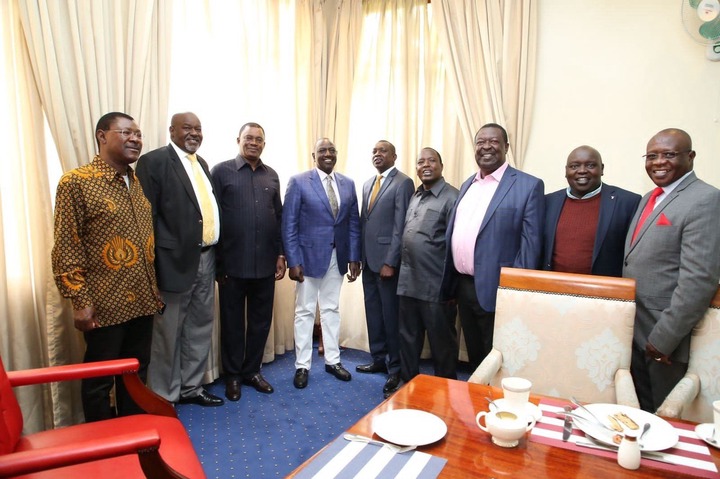 7. Kithure Kindiki - The gentleman fought hard for the running mate position, but luck was on Gachagua. However, when Ruto was speaking in Kindiki's home county, he promised him a slot in his government.

8. Johnson Muthama - UDA chairman, lost Machakos County gubernatorial race because of his allegiance to Ruto, and as such, he stands a chance in Ruto's government.

9. Moses Kuria - Despite losing the Kiambu gubernatorial race, Kuria played a pivotal role in delivering Mountain votes to Ruto, and he might be rewarded during government formation.

10. Mithika Linturi - He lost the Meru County gubernatorial seat, but just like Kuria, he played a role in delivering Mountain votes to Kenya Kwanza.

Just In: Meru Governor Gives A Top Seat To His Husband In County Work