The Service Party of Kenya boss Mwangi Kiunjuri has stated that his party will be holding its own campaigns, citing sibling rivalry in the Kenya Kwanza Alliance which is led by Deputy President William Ruto.

Speaking to the media on Tuesday after a meeting with aspirants and party officials, Kiunjuri argued that some parties in the Kenya Kwanza Camp were being overlooked, a move that he said might result to vote apathy in the August polls thus affecting Ruto's chances of winning.

He however affirmed that the party will be campaigning for Ruto's bid in those own campaign rallies.

"The sibling rivalry, protection of territory and attention seeking is of concern, as this could result in to unwanted consequences for our candidate in Kenya Kwanza. If you invite me to your house, I am your guest, you therefore cannot pretend that I am not your guest," said Kiunjuri. 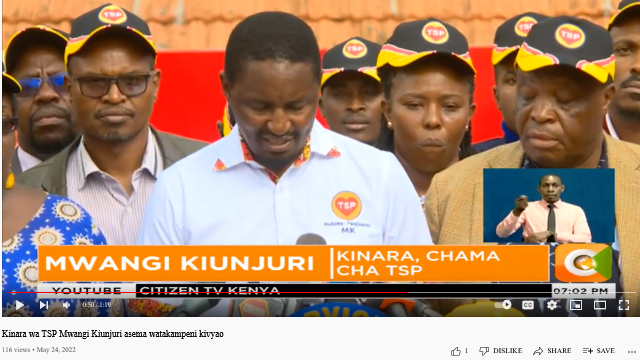 His remarks comes few days after some aspirants in the Democratic Party, and the Farmers Party of Kenya argued that the team which toured Murang'a County few days ago campaigned only for United Democratic Alliance candidates.

The candidates said that they were not feeling comfortable with such a move, adding that Ruto as well as the other senior leaders in the coalition should keep off from local politics, and refrain from asking voters to support aspirants from one political party.

Murang'a Gubernatorial candidate and the Farmers Party leader Irungu Nyakera a while ago complained that UDA was 'calling for zoning' of parties and also the six-piece voting pattern, saying that was something they never signed in the coalition agreement.

Three PROFITABLE Agribusinesses that will earn you more than 20,000 shillings weekly