Kieni Member of Parliament, Kanini Kega now has revealed the number of votes that ODM boss and Azimio la Umoja one Kenya coalition flagbearer Raila Odinga will get a head of August General. Kanini who is among the campaign team selected by Mr Odinga to spearhead his campaign in Mount Kenya region, has said that Raila Odinga only needed 30% of votes from Central but now he commands over 50% popularity. 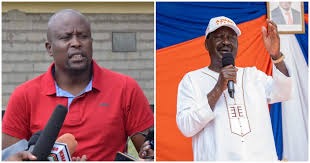 The lawmaker retaliated by saying that Raila's victory is a matter of when rather than if he wins presidential election. He said that the coalition is much determined to conduct weekly polls to see which presidential candidate is more popular than the other. Kega asked his support base to be on stand by when the coalitions begin rolling out the online popularity polls.

The vocal legislator exuded confidence in Raila's presidential bid, stating that he would be the candidate to beat in Mt Kenya by April, and he might surpass their target and Raila would command at least 70% of the votes in the vote-rich region when campaigns officially start on 29th May after the official declaration from IEBC.