By Crazygenie (self meida writer) | 27 days 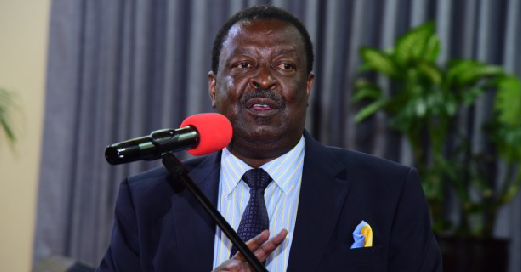 Amani National Congress (ANC) Party Leader, Musalia Mudavadi, has revealed how he warned President Uhuru Kenyatta and his handshake partner, Raila Odinga, that the Building Bridges Initiative (BBI) will collapse if they failed to listen to all Kenyans.

Speaking at Friend’s Church Centre International, Nairobi, Mudavadi also explained how he raised concerns over some dangerous proposals in the BBI document.

“I had warned of some clauses in the BBI document during the launch of BBI one on November 27, 2019, at the Bomas of Kenya. I told Uhuru and Raila what could hinder the BBI bill from going far. The two were chest-thumping and could not listen to me,” Mudavadi said.

The former Vice President further revealed how he urged Uhuru to open a window to allow divergent views that emerged during the unveiling of the final report at Bomas of Kenya during the launch.

He particularly disclosed that he raised concerns to Uhuru and Raila Odinga over the Judiciary ombudsman.

“I cautioned the two key BBI proponents about this. I also said that if you want to make the Executive arm of the government appoint an ombudsman to the courts, you will be interfering with the independence of the courts and the judiciary,” he said.aa

Ex-Senator Unable To Raise Ksh 3.2M For Flying Daughter's Body To Kenya Reveals Her Next Plan

Slogans That Raila Has Used During His Presidential Campaigns

Why Kenyans Should Embrace CBC