Senators In Uproar After Kipchumba Murkomen's Comment on Women's Clothes

By Health.tips.com (self meida writer) | 1 days 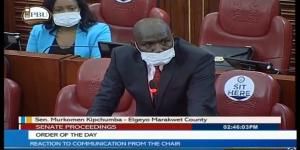 Senators expressed their disappointment in their Elegeyo Marakwet counterpart Kipchumba Murkomen after his comments on the dressing of Narok Senator Ledama Ole Kina.

Majority leader Samuel Poghisio began his opening statement by congratulating Ole Kina on Thursday, July 22, for wearing a suit instead of his usual Masai traditional wear.

Senators burst out laughing at Poghisio's comments but Ole Kina pleaded with the Speaker to rule the Majority Leader out of order for his remarks. However, Murkomen addressing the senate on a point of order did not agree with the Narok senator's traditional wear.

Murkomen equated Ole Kina's Maasai attire to women's skirts and he further claimed that Senators have from time to time had to interrupt sessions and warn the Narok Senator to sit properly.

"... We don't have an issue with the traditional dress of Senator Ole Kina because that dress looks like women skirt and in most cases, we have had to warn Ole Kina to sit properly because women are used to dressing in a particular way," Murkomen stated.

However, Wajir Senator Ali Abdullahi called out Murkomen over his comments on what he termed a lack of respect for Kenyan women and how they dress.

The Wajir Senator noted that the Speaker had ruled to determine that Ole Kina's traditional attire is well accepted in the Senate premises. His sentiments were backed by Nominated Senator Mary Yiane from Kajiado.

Senator Yiane opined that Mukomen was taking shots at the Maasai community over their choice of dressing which is the popular shuka.

Deputy Speaker Senator Uasin Gishu County Margaret Kamar noted that Poghisio was not wrong over his initial comments adding that Ole Kina's dressing was not inappropriate.

Murkomen later rectified his statement and remarked that he was not poking fun at Maasai cultural attire. In November 2020, Senate Speaker Kenneth Lusaka ruled that senators were permitted to wear traditional attire to the chambers.

His ruling came after the Narok Senator attended a plenary sitting, wearing Maasai regalia, which attracted attention from other members of the House.

Lusaka said the constitution recognises culture as the foundation of the nation and the cumulative civilisation of the Kenyan people. "Therefore as the speaker, I rule that he is decently dressed and he should remain," the Speaker ruled

Crucial signs you might be suffering from Wendy syndrome

Why Pineapples Are Important To Women

Harmonize's Ex Fridah Kajala Confirms To Have Moved On (Video)

"Conwoman Alert," MC Jesse Exposes An Imposter Who Has Been Conning Kenyans