The Gatundu Member of parliament hon Moses Kuria has sent out a detailed message while in his hospital bed about the Mt. Kenya Leadership, raising big concerns about the future of the vote rich region.

Kuria cited that on his hospital bed, several issues had been bothering him and he has been unable to get away with them. He cited that the Mt. Kenya region has become an altar where many a career are sacrificed. He said that it took great efforts 25 years ago to raise Mwangi Kiunjuri to the greats heights he achieved so that he could represent the Mt. Kenya region as well as the people of Laikipia.

Kuria went ahead to say that all these has been taken in a drain as 25 years later, Mwangi Kiunjuri is going back to where he was as he will be vying for Laikipia East Member of parliament next year.

"..25 years ago, we raised whatever money we could to send a colleague and friend, then Nanyuki tout Mwangi Kiunjuri to parliament to represent the great people of Laikipia East. Quarter of a century later, the self made Mwangi Kiunjuri has gone back to where he was 25 years ago- He will be vying to be Laikipia East MP next year." Kuria Claimed.

Kuria went ahead to say that Kiunjuri was one of the only two Cabinet Secretaries who president Uhuru Kenyatta had the guts to fire in his 10 year term. He compared the Mt. Kenyan with other regions and concluded that the region is going in the wrong direction and sympathized with the future generations.

Here is the detailed statement from Moses Kuria. 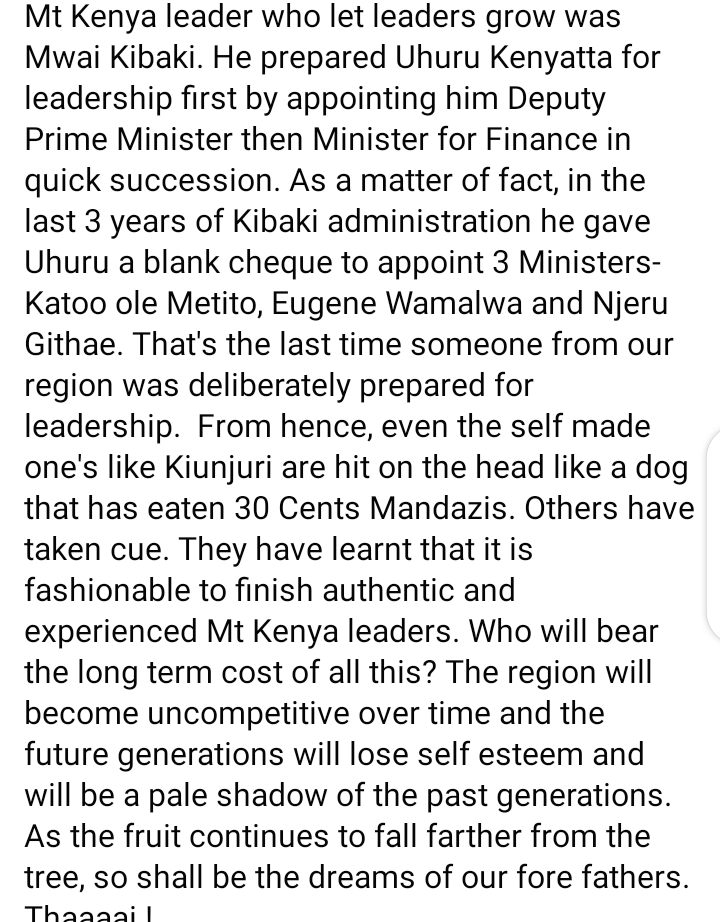 Every County Must Have a Public Swimming Pool, One Of The Popular Governor Urges.

Ruto Will Beat Raila Hands Down, But OKA Has A Better Chance, Says Farah Maalim