Few months ago, Garissa Township Member of Parliament, Aden Duale, raised critical questions on how the power transition will happen in the country after President Uhuru Kenyatta leaves office after the August 9 polls. 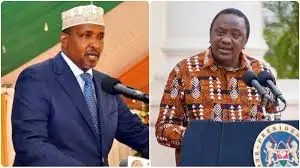 Duale questioned why Uhuru has not yet appointed the Secretary to the Cabinet, a position he said plays a crucial role in the power transition after polls.

However, Duale has revealed that he had received a letter from the Head of Public Service Joseph Kinyua after complaining over the vacancy in the office of the Secretary to the Cabinet.

The legislator stated that Kinyua informed him that he had been appointed as the Secretary to Cabinet in an acting capacity by the President.

However, Duale opined that the move was a violation of the constitution. 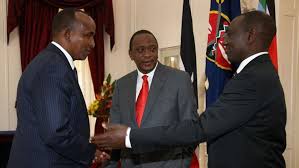 He faulted the Head of State for leaving the position vacant since 2014, despite its vital role in the handing over of power from one regime to the next, insisting that Uhuru must make the appointment before dissolving Parliament.

The letter from State House has awakened the debate on whether President Uhuru will smoothly hand over power to the next government.

I'm Not Competing With You, Step Aside And Let Me Deal With Raila, Ruto Tells Off Uhuru