By BestWriterr (self media writer) | 15 days ago 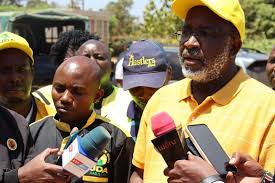 Kiagu ward by-election is taking shape and it's clear it's between jubilee party and UDA given the fact that CCK and Nopeu parties were disqualified. It's clear the UDA party has highest chances of winning given majority of the local leaders in Meru County are largely in support of the Ruto candidate as opposed to the ruling party.

The possible verdict in Kiagu Ward by-election come October 14th is a win for the UDA party by landslide as well a serious embarrassment for jubilee party. Clearly as things stand the party has little chance given the party has lost the support of majority grassroot leaders ahead of the 2022 general election.

Time will tell though of what will unfold going into the by-election even as we wish the best candidate to win. It's clear as things stand UDA party is mostly likely capable of winning the seat but it's all but a matter of what and see of what happens for any scenario is possible given a day in politics is clearly a long time.