By @chibupress (self meida writer) | 25 days 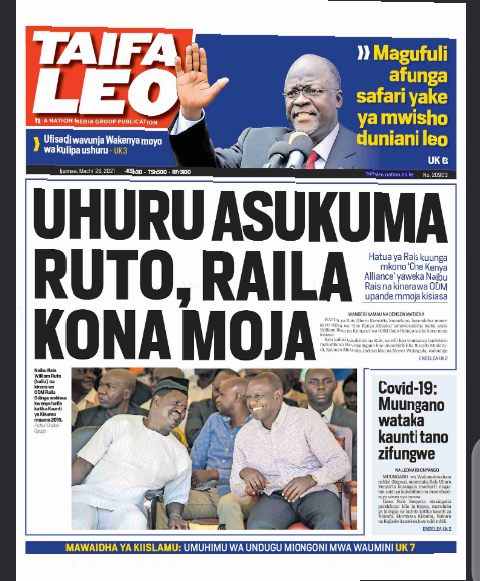 Two political heavyweights seem to be gravitating towards each other after they separately ran into headwinds in their relationship with the president and his allies.The president seems to be pushing Raila out of handshake so that he will lack option but to give in his demands.

Yesterday, Deputy President William Ruto suggested that he was open to a political alliance with ODM leader Raila Odinga in the run-up to the 2022 General Election.

The Ministry of Health has included people who are 58 years and above in the ongoing Phase One Covid-19 vaccination.

The leaders vowed to form One Kenya Alliance movement that will popularise BBI and ensure Kenya is United ahead of 2023 general election.

The TZ president Magufuli will be laid to rest today in his home province of Chato. 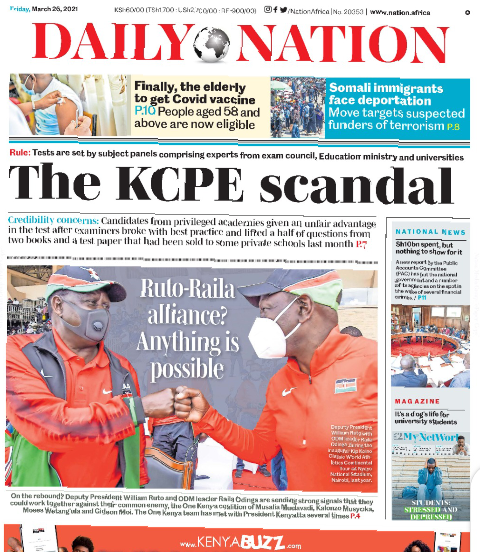 KCPE scandal again as the candidate from the privileged academies be given an unfair advantage in the test by after examiners broke with the best practice and lifted half of the questions from two books and two papers that have been sold to some private schools last month.

In the Daily Nation, the deputy president William Ruto and Orange democratic party leader Raila Amolo Odinga seems to reading the same page. From yesterday interview at Citizen Radio . The deputy said he has only differed with Raila ideologically but he was opened to working with him once again.

People aged 58 were added to the list of those who will be given priority in the ongoing vaccination process in the country.

Kenya still maintains that Dadaab and Kakuma refugee camp to be closed.The terrorist have been using the two camps as a hiding place.Somalis living in the camps face deportation.

Raila Odinga Condemns Rising Cases Of Gender-Based Violence, Suggests What Should Be Done

Kositany Defends Mt Kenya MPs For Negotiating With Ruto, Reveals The Main Agenda For The Negotiation