Uproar in ODM Over Oparanya-Ruto Meetings, Top Officials Term Him a 'Mole' as Kakamega MCAs Respond 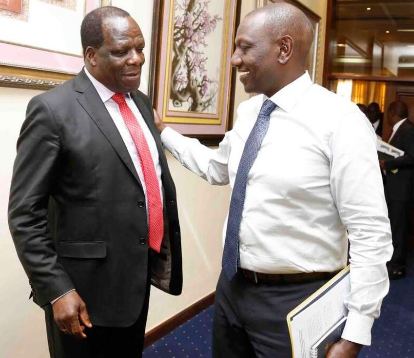 The revelation by Deputy President William Ruto that he had met with Kakamega Governor Wycliffe Oparanya severally, a disquiet has emerged in the Opposition party with senior officials terming Oparanya a 'mole'.

According to sources who spoke with K24 and People's Daily, the disquiet in the party had forced Raila Odinga who is ODM's party leader to come to Oparanya's rescue just to calm down the storm within the party.

“Baba is shielding Oparanya from some members who feel he is a betrayer and a mole. That is his only heavyweight and a trusted ally from Western. The biggest undoing is that Oparanya is doing his things and when caught he says Baba is aware,” said one of the sources.

Yesterday, Kakamega MCAs led by Joel Ongoro who is the Majority leader stated that Oparanya was not leaving the ODM party for United Democratic Alliance (UDA) just by meeting the second in command.

The county reps came to his defense stating that it is his (Oparanya's) constitutional rights to meet any leader he deems fit and he does not need any permission from the ODM top officials to do that.