By LarryKatana (self media writer) | 11 months ago 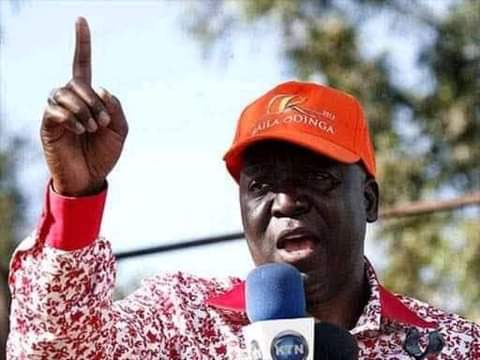 In a long and colourful political career spanning almost two decades, the late former Gem MP Jakoyo Midiwo established himself as one of the most vocal politicians in the country.

In Parliament where he served as MP for three consecutive terms until 2017, Midiwo was an articulate debator.

But there were times when Midiwo's tongue landed him in trouble. The perfect example here was in 2012 when he made some chilling allegations on the planned assassination of the then Prime Minister Raila Odinga.

While speaking during a funeral service in Siaya which Raila attended, Midiwo raised the allegations of the planned murder of Raila with some powerful figures in the then Grand Coalition Government said to be behind the plot.

" Chairman, they want to kill you. You are about to die in a few weeks to come. I am ready to record a statement even before the Bondo OCPD to confirm the seriousness of the matter," Midiwo was quoted as saying by Nairobi News.

The then Foreign Affairs Minister Prof. Sam Ongeri was implicated in the alleged murder plot.

While denying his alleged role in the murder plot, Prof. Ongeri said that he has no reason whatsoever to assassinate the Prime Minister even as he vowed to move to court to sue Midiwo.

Following the allegations by Midiwo, Raila supporters were concerned about the security and safety of the Prime Minister.

As a precautionary measure following the claims, Raila's's security detail was scaled up even as the Government moved with speed to investigate the allegations.

In 2015, Midiwo was arrested with the Government accusing him of making alarmist statements that could easily threaten the security of the country. But he was later set free.

Is Azimio in hot soup for playing Sauti Sol music during unveiling of Martha Karua as running mate?