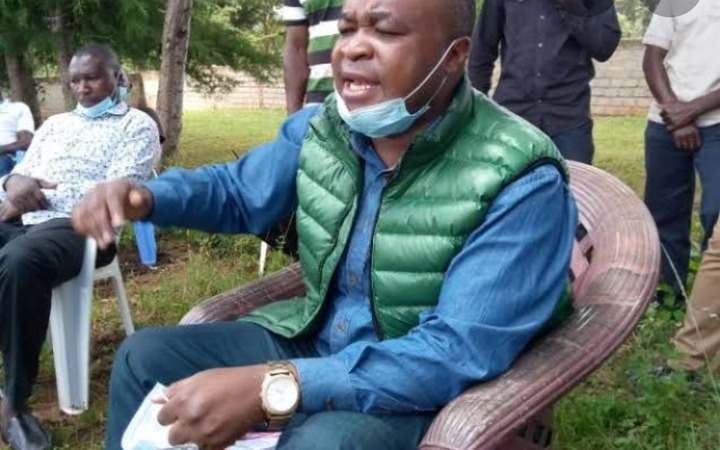 A Campaign Vehicle belonging to Kiminini Mp Chris Wamalwa was yesterday set on fire by irate residents of Transzoia County during night Hours, claiming that it knocked, injured and killed a Kenyan in an attempted Hit and run situation, by the campaign team who were scared.

Reports reveals that the driver of the Matatu which was designed by a 14 seater psv vehicle was allegedly drunk and was driving at very high speeds, and being inconsiderate of the movements of people everywhere in the road, since they were on rush hours to reach to their homes.

A video shared by North Rift News showed the white Car which was painted with UDA colors all around and pictures of Mp Wamalwa Standing in front of the residents who had sorrounded and blocked it from moving forward or backwards. Some even carried stones and sharp weapons ready to attack the driver.

It was not long after one of the people suggested that they should set a blaze the Vehicle, a decision that resonated well with many of them who turned to bring Petrol and lighter. They then sprinkled the flammable liquid around the Car and threw fire before it burst into flames. 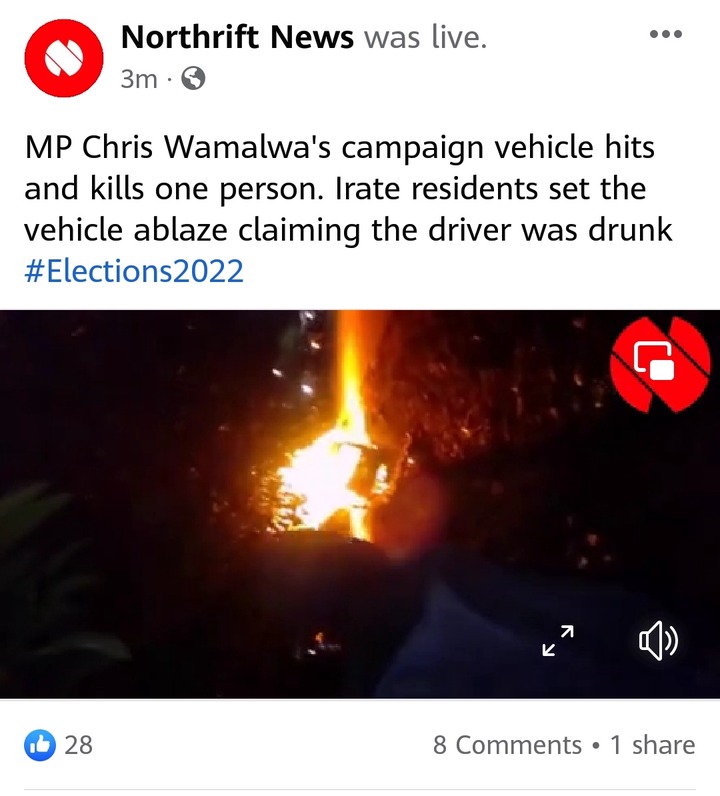 Also on the ground, a woman who was not identified cried out while claiming that the driver should be arrested some She feels the pain that is beyond endurance. She was however supported by other women who joined the whole mourning in unison.

"Please God this is terrible and should not happen. This drunk fool should be behind bars." She said.

Another man also on the same spot alleged that all the young people who are sorrounding the Mp and doing His Campaigns are usually morally corrupt and always on a drinking spree, before they finally hit the road to do the Campaigns, which often leaves mistakes behind.

"All the campaign boys belonging to Chris are always drunk. This is what they do. They just cause trouble." He said.

Although the real location of the Incidence has not been revealed yet, close reactions among Kenyans showed that most were of the opinion the the Mp should present Himself to the DCI and then to court to answer the charges together with His driver, while others called upon the government to regulate the drivers and make sure they set new rules for the Campaign systems.

Such has been happening in the past, especially within the Rift Valley Nyanza and Western regions. Months ago, a vehicle that was allegedly belonging to ODM Mp Hon Odhiambo killed a cow since it was overspeeding. Another one belonging to Mp Ben Momanyi of Kisii, also did the same in Nyanza, leaving several injured.

Here is the Video link :

JUST IN: Night Tragedy as a Building Collapse in Ruai, Several Trapped And Rescue Operations Ongoing