Kenyan Members of Parliament have resumed sittings after having been away on short recess.

On the first day of the Senate sitting, Baringo County Senator Gideon Moi attended his session from his Nairobi home.

The outspoken Senator attended the session by asking a very pertinent question regarding the Kazi Mtaani programme that has been under the sponsorship of the National Government. 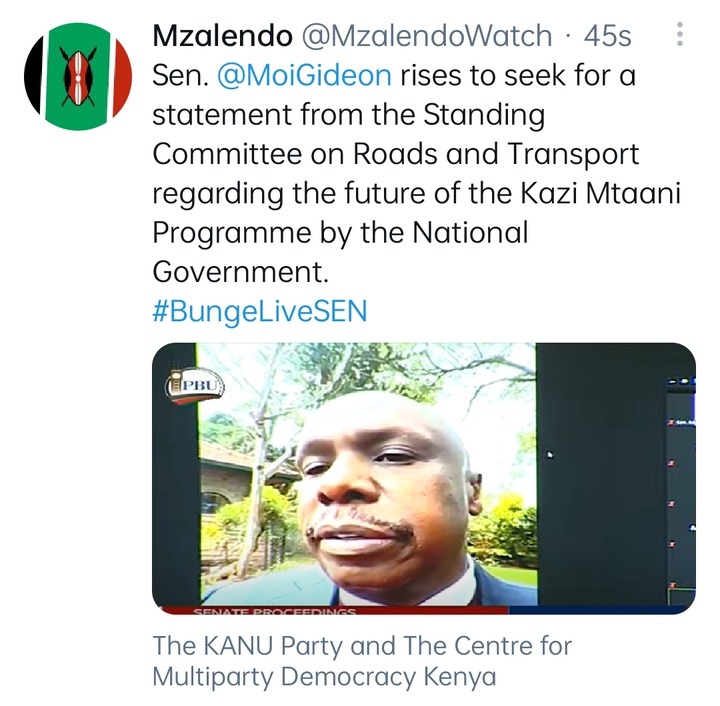 "Sen. @MoiGideon rises to seek for a statement from the Standing Committee on Roads and Transport regarding the future of the Kazi Mtaani Programme by the National Government.#BungeLiveSEN"https://t.co/XjqzABy6xf

This comes just a day after the One Kenya Alliance held a meeting aimed at focusing on the way forward as Kenya prepares for the next general elections.

The members of the One Kenya Alliance have been supporting the contentious Building Bridges Initiative report which has been under criticism from the deputy president William Ruto.

The deputy has been attacking the founders of the BBI report (BBI) Program, whose fate is currently in the hands of the appellate court.

The High Court outlawed the 2020 constitutional amendment bill, after some activists and organizations opposed it. President Uhuru Kenyatta and ODM leader Raila Odinga, the founders of the report, appealed, with a decision expected in August 2021.

During his visit this week to Ukunda, Mombasa, the Deputy President said the problems facing the nation were not the Constitution but the economy. Appearing to direct attacks on President Kenyatta and Mr Odinga, Dr Ruto praised the high court's decision to "stop the reggae process". of no benefit to the average citizen.

"Let me tell you a story, they were telling us no one can stop reggae, it was stopped. They may have the power, to use the chest, the Criminal Investigation Department (DCI), the Ethics and Anti-Corruption Commission (EACC) to achieve their personal goals, but we tell them we have God, ”he said, addressing the crowd.

"The chest and money they were using to change the Constitution to share power the court has ruled is an illegal and illegal scheme," Dr Ruto explained. The BBI was created after President Kenyatta and Mr Odinga announced to bury their political differences in March 2018, through the Handisheki agreement.

The Deputy President and his entourage have been criticizing the reconciliation, claiming it was a conspiracy to shut down his accounts to enter the State House in 2022. During a visit by Dr Ruto Ukunda, who also used the opportunity to publish a campaign to succeed President Kenyatta, he emphasized The economy is deteriorating and some politicians have selfish ambitions.

"We can't talk about leaders and titles, it's time to talk about the common man. The constitution is not a problem, the economy and the leaders are the problem, ”he said.

We Are Sure That Our 5th President Will be This Person? Uhuru`s Ally Claims Amid 2022 Polls