"You Can't Lecture us on Patriotism," Kenyans Tell CAS Kinuthia After he said They Look Uncivilized

By HeraldKing (self meida writer) | 14 days 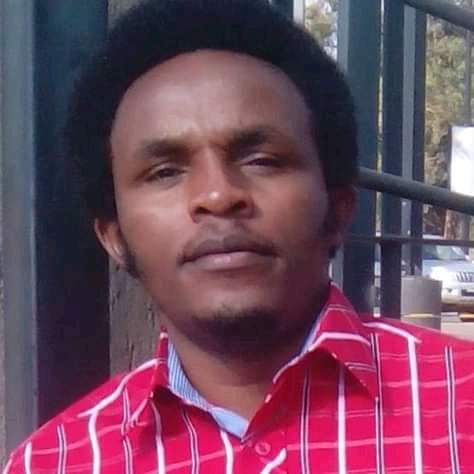 Education Cabinet Administrative Secretary Zack Kinuthia has been bashed online after taking condemning Kenyans petitioning International Monetary Fund not to offer Kenya any loans due to corruption level in the country. Kenyans have come out in large numbers to protest the approval by IMF to offer Kenya additional 255 Billions in the fight against Covid-19 pandemic.

In his argument, the CAS blasted those behind the move saying it was being non-patriotic for Kenyans to expose their 'uncivilized' characters at the international organization. He added that the money was approved for the good of the country.

"In bare and clear terms, it is a degenarated sense of decayed patriotism or simply alarming lack of patriotism for any Kenyan to have exposed their country into the ridicule as far as Intentional Monetary Fund loan facility to Kenya is concerned," he posted. 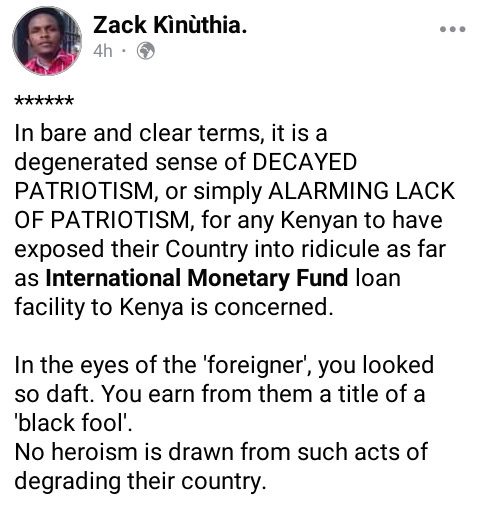 He added that there is no heroism earned through such exposure but only makes Kenyans look daft and black fools in the eyes of foreigners.

"You look very uncivilized. You got to respect your country among the rest for her value in the global stage," he said adding that Kenyans need to think patriotism before their selfish ambitions. 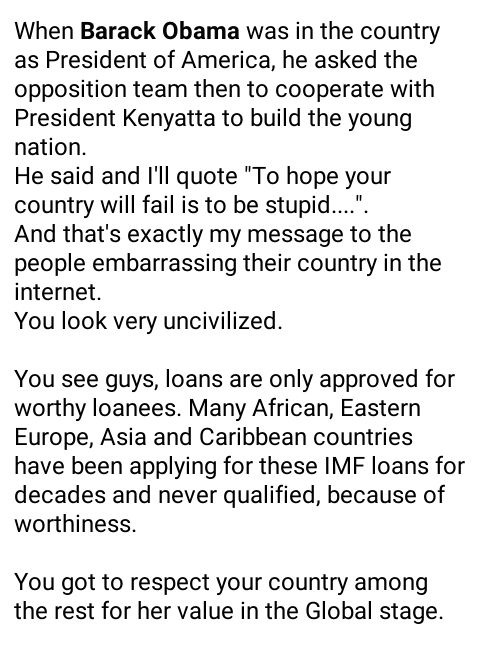 This did not go well with the Netizens who told him off not to lecture them on Patriotism. They said that the government has lacked accountability due to corruption. There is no value for money borrowed. Others told him off that he was happily celebrating as he is among those in government who are the beneficiaries of the loot.

Martin Ndirangu and Chris Cason told the CAS not to lecture Kenyans on Patriotism. Martin indicated that President Kenyatta admitted that Kshs 2B is lost daily due to corruption.

Tonny Mwangi insisted that what Kenyans want is accountability on how the money is spent. That makes patriotic Kenyans to fight corruption to that level.

Abel Kamau told Zack to take positively the message from Kenyans and act upon it. 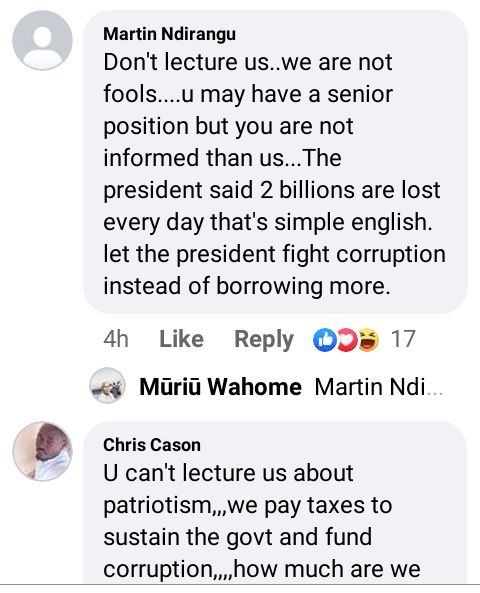 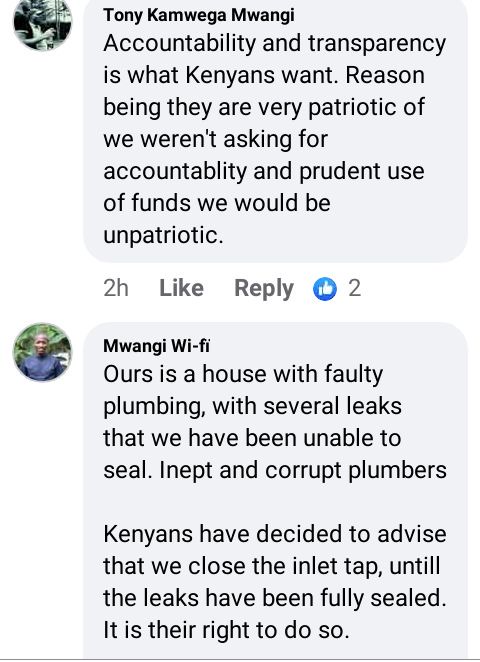 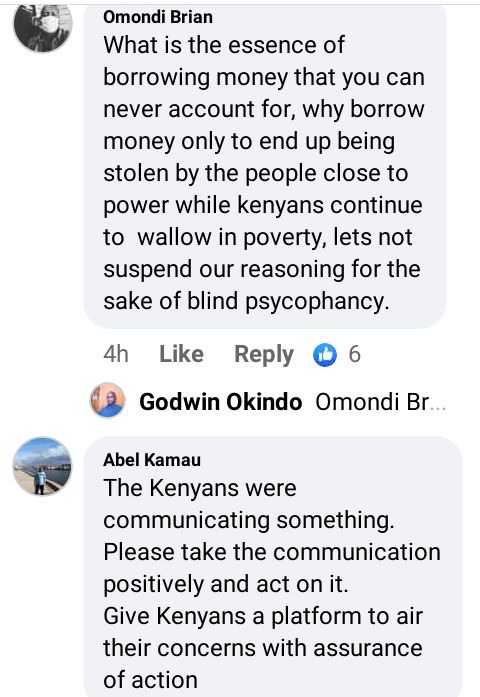 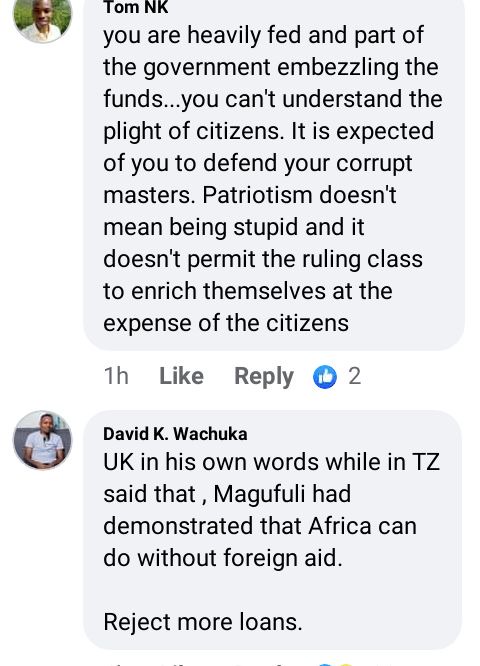 Kahara Kamau: One can't find the hand that feeds him. This should tell you that Kenyans do not trust their leaders and the leadership of the day. Actually, the likes @ledamalekina and other MPs should sponsor an impeachment motion or pass a vote of no confidence

@SonoftheSoilOne said, "If the money was being well spent no one would be ranting against the loan. Before getting a new loan, account for the 2 billion lost daily through corruption and then we can start from there."

JAMES: We are against loans that end up in personal pockets, as Govt kindly give a detailed audited accounts of monies received for covid-19 mitigation before asking for any other facility. Mtajua hamjui, nonsense! 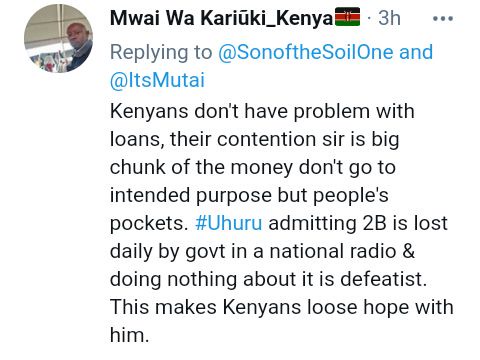 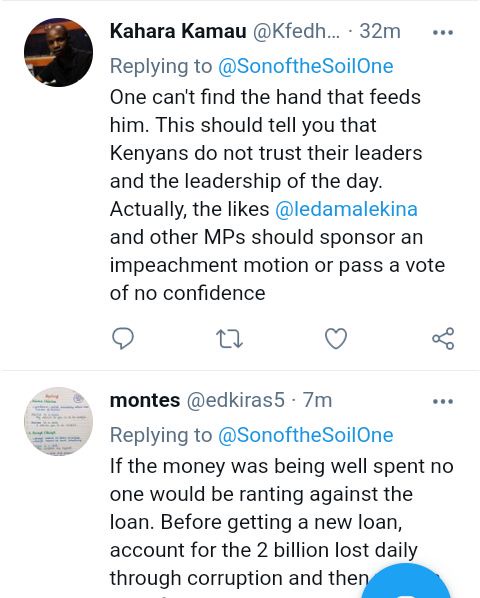 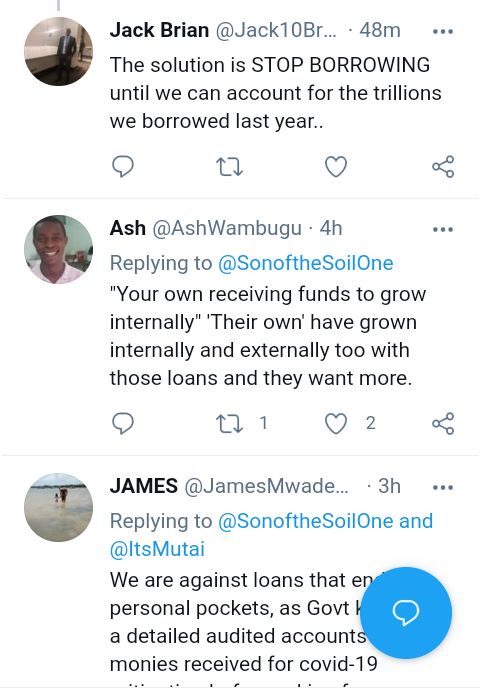 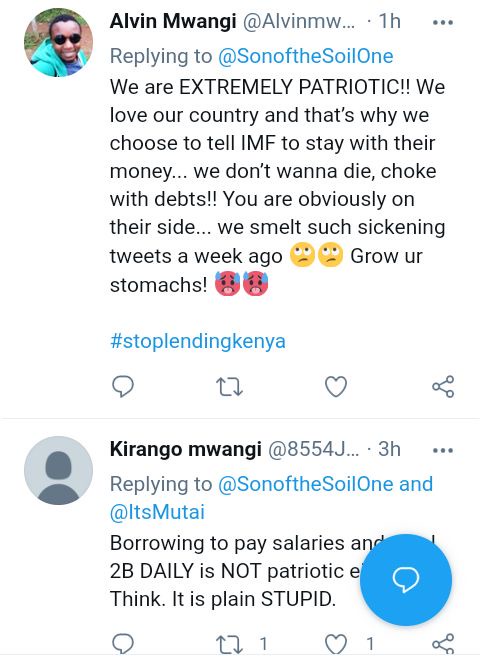 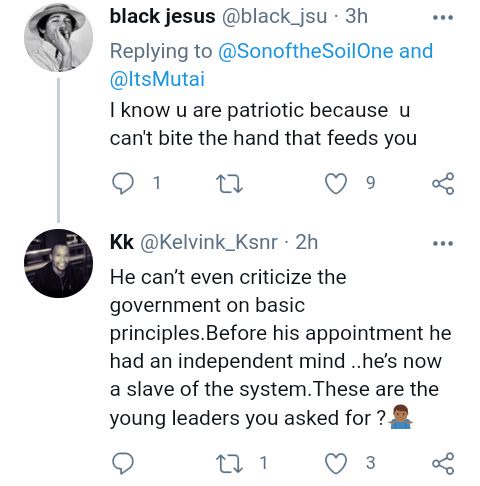 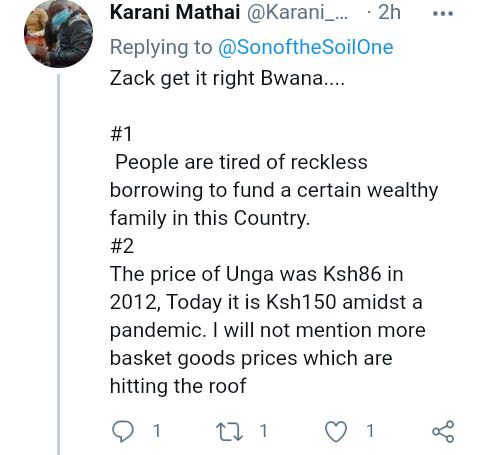 Mwangi: We are EXTREMELY PATRIOTIC!! We love our country and that’s why we choose to tell IMF to stay with their money... we don’t wanna die, choke with debts!! You are obviously on their side... we smelt such sickening tweets a week ago Grow ur stomachs!

Wycliffe Ogutu: They must just react similarly why! They don't feel the impact positively rather they feel it negatively through increased fuel prices,....

Kimna Junior: If the growth is meant to benefit only the few at the top of the pyramid and not the majority at the bottom,as we have learnt from past, we don't need it. Tumechoka!

charles kinyua: Boss am dissappointed please choose silence in this.We are the leaders of tomorrow and Uhuru has left no space for growth. in laymans language He has f**d up no amount of Public Relations will help. it clear for people to see. Projects were overpriced no saving face just go

Please Stop Eating Eggs With Any Of These 7 Foods, It Is Very Harmful

A Morning Prayer To Begin Your Day

Say no to Bullying and Gender-Based Violence, The Story of This Young Girl Will Move You Into Tears

'I've Killed Too Many People, I Lost Count. This Is Why I Blame My Mum.' Unremorseful Man Confesses

4 Weird Things Ladies Do When They Are Alone