By JamesSultan (self media writer) | 16 days ago 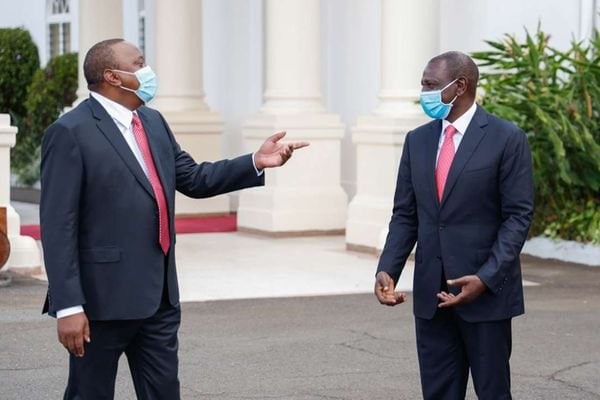 An attempt by catholic bishops to in a way influence the two leaders to a second 'handshake' has fluffed on arrival. The problem with religion and the church in particular is the belief that prayers can heal political differences. A political handshake can only be influenced by the two leaders themselves and not a third party. Most importantly, their interests must be aligned. At the moment, the President and his deputy's intrests are nothing but aligned.

They have never been aligned. Their political marriage was one of inconvenience. It was a house built on sand. It would never stand. The Deputy President started scheming to be president the first day jubilee administration was sworn in. The president and his handlers knew about this earlier but couldn't do anything about it lest they risk losing the 2017 general election.

With his re-election in 2017, the President started cutting his deputy's influence but needed another political enigma to achieve this and not destabilize the working of his government in the process. This led to the March 9th handshake between him and ODM leader Raila Odinga. No one thought this was possible but as I said earlier, politics is about intrest. As long as intrests are aligned, everything is possible in politics.

While BBI failed, the new found bromance between the President and the former premier has only blossomed. At the same time, his relationship with his deputy has continued to take the downward trajectory. There was an argument that selling Raila Odinga in Mt. Kenya was like selling pork in an islamic state, but the central kenya elites are ready to back him if that will stop Ruto from becoming president.

The truth is the powers that be are afraid of a Ruto Presidency because they are unsure of what the man from Sugoi is going to do while in power. Historically, Moi's regime decimated the Central Kenya elites and it is a classic case of once bitten, twice shy. They are afraid Ruto will use his political power to dismantled their riches the way Moi did.

Therefore there is more to the political differences between the President and his deputy that meets the eye. Their differences have reached a point of no return. Raila Odinga now enjoys the trappings of power. He recently met the influential Mt. Kenya foundation in a move that could cement his capture of the vote rich central kenya region.

The former premier was with the President as the head of state launched the Kibera level three hospital. This just shows how strained the relationship between the President and hia deputy have become. It should be the deputy president, not the ODM leader launching government projects with the president.

While I know that there are no permanent friends and enemies in politics, to expect a second handshake between the president and his deputy is in a way expecting the biblical manna in this day and age.