By jameswatetu (self media writer) | 4 months ago

Azimio coalition leader Raila Odinga has formed a team of 16 leaders from all over the country to spearhead his regional presidential campaigns as he aims to reach voters all over the country and popularize his bid. The national wide campaigns will be spearhead by himself and his running mate Martha Wangari Karua.They will be assisted by MPs Junet Mohamed, Caleb Amisi, Mishi Mboko, Richard Onyonka, Opiyo Wandayi, Babu Owino, Philip Pande and Maina Kamanda , Peter Kenneth and Carol Karugu. 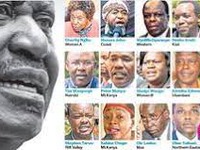 The presidential hopeful and his azimio group has mapped the nation and subdivided the nation into nine regions in order to reach a large population and sell the azimi agenda ahead of the August polls.The Mt Kenya region team will comprise of Agriculture Cabinet Secretary Peter Munya, Murang'a Woman Rep Sabina Chege and Nakuru Governor Lee Kinyanjui. 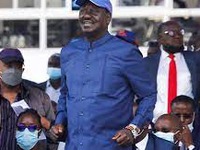 The western Kenya team will be spearheaded by Kakamega Governor Wycliffe Oparanya and Defence CS Eugene Wamalwa.The Rift Valley team will be led by Stephen Tarus in efforts to get votes from the Kenya Kwanza William Ruto backyard.The Ukambani team will be captained by Makueni Governor Kivutha Kibwana. 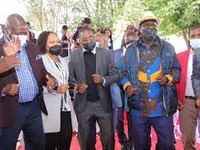 Mombasa Governor Ali Hassan Joho will lead campaigns in the Coast region while Kajiado Governor Joseph Ole Lenku will coordinate the Maa region which looks set to be a stronghold for Raila Odinga. Nyanza region campaigns will be led by Kisii Governor James Ongwae, ODM Chairman John Mbadi and MP Simba Arati.Westlands MP Tim Wanyonyi and Chief Administrative Secretary Rachel Shebesh will take charge of the campaigns in Nairobi, while the North Eastern region campaigns will be headed by CS Ukur Yatani and Feisal Abass. 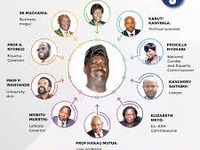 Kitui Governor Charity Ngilu, Gladys Wanga and Rahab Muilu will lead women's campaigns across the country and will each lead a team of women comprising of sitting and aspiring women leaders from the Azimio coalition, as well as those from the Maendeleo ya Wanawake organisation in bid to bring the women's votes to the azimio basket.

Content created and supplied by: jameswatetu (via Opera News )