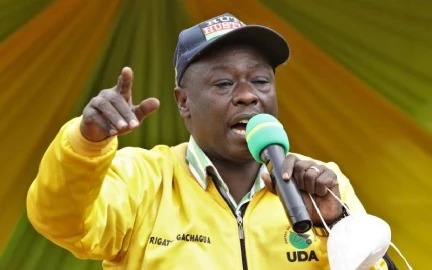 Rigathi Gachagua, Deputy President William Ruto's running mate, says they will only seek re-election if they have performed well in their first term.

Mr Gachagua stated in Uasin Gishu on Wednesday that, unlike President Kenyatta and Dr Ruto's unfulfilled pledge of a 20-year rule, they were just seeking a five-year commitment based only on their performance in office.

"We're asking for five years so that we can carry out our promises." If we achieve it, we will notify you, and you will add five years to our timeline. We don't want kumi-falsehoods kumi's to spread (Ten-ten). First, we'll need five years. There are a lot of falsehoods, deception, and conmanship in the 10 years (type of promise). This contract is susceptible to renewal based on performance, as well as termination based on non-performance," Mr Gachagua said.

He urged members of the United Democratic Alliance (UDA) to vote for those who would work for them and are familiar with the 'bottom-up' economic approach in other seats such as ward representative, MP, woman representative, and governor.

Mr Gachagua urged Rift Valley residents to vote for candidates based on their abilities to revitalize the economy and improve people's lives, rather than ethnic or regional factors.

"Do not elect individuals because they are from your region or because the President is from our region," he urged. "We are truly suffering, and we are not supporting Ruto because he backed Uhuru, but because he has a plan to improve our lives."

He also slammed Azimio la Umoja One Kenya leaders, claiming they lack a genuine plan for the country and are just concerned with changing the Constitution.

"Unlike our opponents, who are focused on constitutional review, we are signing economic charters with people from all counties." That's why, when Raila picked his running partner, he informed her that her first task would be to rewrite the Constitution," Mr Gachagua explained.

Mr Odinga stated that Ms Martha Karua, his running partner, will be in charge of monitoring "additional work" on the Constitution.

"I want her to finish the unfinished task of building our Constitution," the former premier stated. "I want this done because when Kibaki and I campaigned for the 2010 Constitution, we knew it was a work in progress."