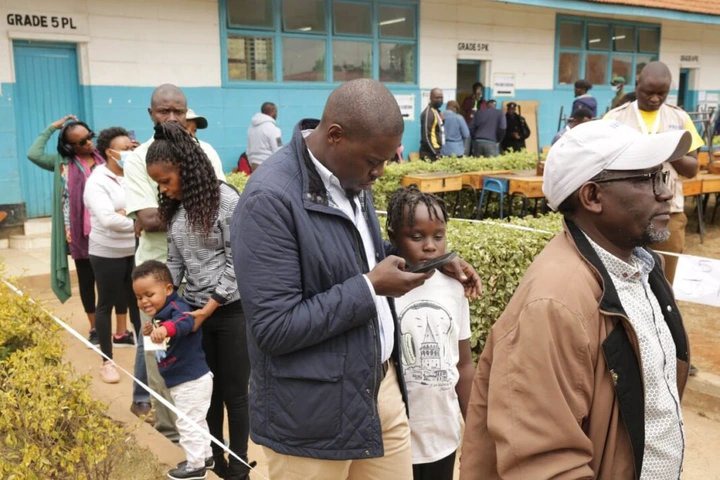 Sakaja stands in line while he waits for his turn to vote. Photo|Sakaja

Johnson Sakaja, a senator from Nairobi, is happy now that he has confirmed that he is one of the leaders that people in the country will be voting for today.

This happened after he went through a string of hard times and court cases that almost got him kicked off the list of people running for governor because his academic credentials were in question.

Sakaja voted at a primary school in Nairobi called St. Georges. "I'm happy and proud at the same time. Many people would have preferred that I wasn't on the ballot today, but I'm here, and I can confirm that I voted for myself, "Sakaja told reporters after he was done voting.

He wasn't happy with how the whole thing was handled, though, and he hopes that things will get better in the future.

"There is some confusion, but I think the IEBC is doing its best." For example, I was in one line because they said it was alphabetical starting with the first name Johnson, but when I got to the front, they told me there was overflow, so I should go to another line. Sakaja said, "I think a lot of that information should be available before people line up."

The senator said that in another case, an old man spent a long time at the polling place before being sent to a different polling place. He asked the commission to help voters understand how the process works.

Another problem was that some polling places in the city didn't treat his agents well.

"They say that IEBC should stamp the oath of secrecy that we have already stamped." "In some places, the KIEMS equipment wasn't working," Sakaja said.