By BlogsgotNews (self media writer) | 1 month ago 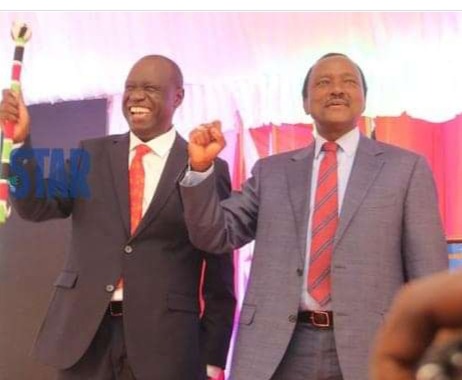 Today on the 22nd may 2022 marks an important day for the entire Wiper party leadership as Kalonzo Musyoka has presented signatures of voters backing his presidential bid to the IEBC.The signatures were presented on his behalf by his running mate Andrew Sunkuli. While presenting the signatures at the Bomas of Kenya, Kalonzo's running mate Sunkuli affirmed that the Wiper leader would be on the ballot as a presidential candidate.

Kalonzo's presidential campaign had earlier hit the road when he had earlier formed the One Kenya Alliance with former NASA colleagues ANC party leader Musalia Mudavadi, Ford-Kenya counterpart Moses wetangula, KANU leader Gideon MOI and Narc- Kenya Martha Karua before some of its allies decamped to the rivalry Kenya Kwanza coalition which made the one Kenya Alliance combination weak and they later accepted to fold their ambitions and support the Azimio presidential flag bearer to form the Azimio- Oka coalition.

Kalonzo musyoka later own decamped from Azimio to run for president after being denied the running mate position which was awarded to Martha Karua and Kalonzo awarded the chief cabinet secretaries position which is not captured in the constitution of Kenya.

Content created and supplied by: BlogsgotNews (via Opera News )

JUST IN: Dates and Venue For Deputy and Presidential Debates and Moderators Announced