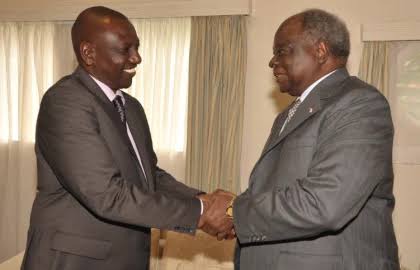 After post election violence which was experience in Kenya between 2007/2008,the grand coalition cabinet, was a designation for the coalition government in Kenya from April 2008 to April 2013.

Kibaki continued serving as the president while Odinga accepted a non-executive prime ministerial post. The cabinet constituted a record 40 ministers and 52 deputy ministers from different political parties. The deal for the creation of the cabinet was finalized on 13 April 2008, followed by the appointment of Odinga as prime minister on 14 April and the swearing-in of all members of the cabinet on 17 April.

Hon William Samoei Ruto was appointed to be the Minister for Agriculture but later he was sacked.According to Dr Alfred Mutua ,Hon William was sacked by Hon Odinga on 14 June 2010 despite being Kibaki best minister.

Lenku or Nkedianye? Headache For Azimio In Kajiado As Polls Reveals UDA Likely To Win