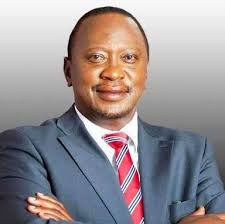 The Mount Kenya region is headed to next year's general election without a formidable presidential candidate.

Efforts to unite the region have been underway even as foremost presidential contenders continue making inroads.

The team had even come up with it's ireducible Minimums on what what they want as a community.

The leaders among others want some proposals contained in BBI which are beneficial to the region be re-looked into.

Nevertheless, president Uhuru Kenyatta who was the force behind the now collapsed BBI seems not interested at all by the quest for unity.

According to his closest allies who spoke to people daily, Kenyatta feels betrayed by some of the leaders from mount kenya whom he accuses of spearheading the collapse of BBI at the court of appeal.

According to Uhuru, all that the leaders are now talking about was contained in the BBI and therefore it would have benefitted the people of central could it have not collapsed.

Kieni member of Parliament kanini kega who is one of Uhuru's closest confidant told people Daily that the president may not be against the quest to unite the region but wondered how he(Uhuru) can support karua and his team when they fought his BBI project.

Kanini said that Uhuru's team that has been meeting with Karua, Kiunjuri and kuria is no longer interested in the talks after realizing that they are not genuine in their quest to help mount Kenya.

Nyeri town MP Ngunjiri Wambugu said that Uhuru is still unhappy with the people who opposed his quest to Change the Constitution.

"He feels betrayed and frustrated by the very people he believes he wanted to assist by preparing a better future for". Said wambugu.

"We were with the president somewhere and he said that he finds it hard to forgive some people because of the route they took us through (lead to the fall of BBI)." He added.

Other Sources reveal that Uhuru has even gone slow on his bid to unite the NASA brigade and is now keen on building his legacy and finishing the projects he started.

It remains to be seen whether the president will just go home quietly like his predecessor Mwai Kibaki who didn't endorse anybody.

However, allies say before the end of his tenure, he will visit the mount kenya region and tell the people of the good plans he had for them and how they were frustrated by some leaders. 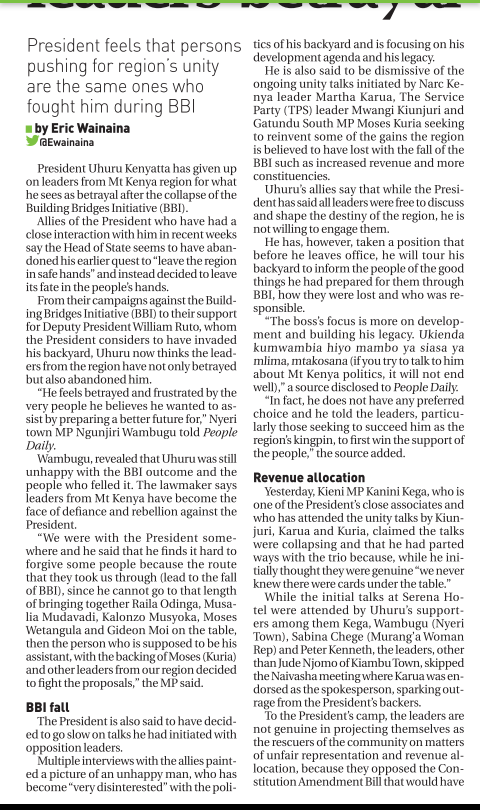 Mt Kenya Governors Publicly Change Tune On Raila Odinga, Reveal What They Are Planning For 2022

You Are Not Seeking Luhya Presidency, Join Raila Or Ruto; Oparanya To Mudavadi and Wetangula