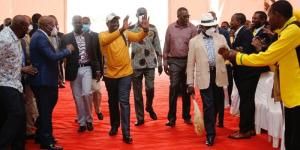 United Democratic Alliance (UDA) Party digital strategist, Dennis Itumbi, on Friday, October 15, was the first to call out the station for favoring Orange Democratic Movement (ODM) leader Raila Odinga, and not allocating Ruto a slot 34 minutes into the Primetime News of 9:00 pm (EAT).

The former Digital Communications Director at State House, likened the station to the United States(US) Fox News station. The political scene is experiencing a shake-up with campaigns around the country.

“It is 9:37 pm, 34 minutes into News, no story on William Ruto.The Running order Citizen TV Kenya decided Ruto and the Hustler Nation belong to the filler part of the Bulletin. It is official Citizen TV is the FOX News of the 2022 Campaign, slanted for Raila Odinga - Ni sawa. Tupatane MBELE! (It is alright, we will meet ahead),” Itumbi stated.

The labeling of Citizen TV as Fox News is meant to refer to similar bias in the coverage of US President Donald Trump, during the 2016 election campaign.

The chairman of UDA, Johnson Nduya Muthama, disclosed that it is not only Citizen TV media house that is biased but other stations as well are ganging up to give Ruto little airtime during Primetime hours.

“Media houses have ganged up against William Ruto's Presidential campaigns by giving him few seconds of their airtime. Such political shenanigans are well known to the hustlers.

“The same 'Modus Operandi' (someone's habit of working) was tried in 2013 and 2017 but was defeated at the ballot box. William Ruto is the 5th President of Kenya after President Uhuru Muigai Kenyatta,” Muthama added.

SK Macharia, Royal Services Media owner, has been a staunch supporter of Raila and is even part of the Mount Kenya Foundation (MKF) that backed the presidential bid of the ODM leader.