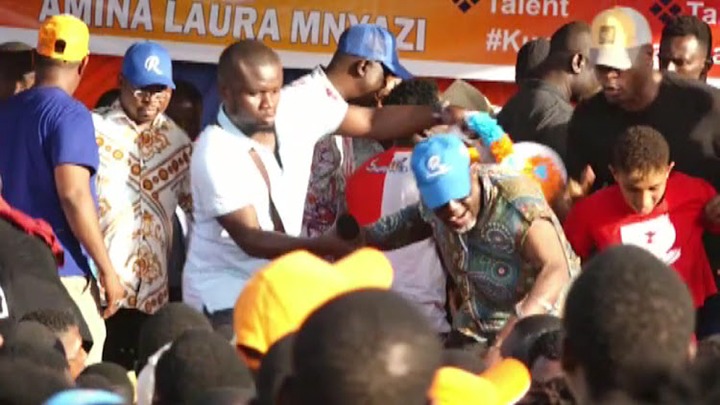 Azimio La Umoja One Kenya coalition held one of its affiliate rallies at the coast with ODM leader Raila Odinga and his running mate Martha Karua in absentia.

However, halfway through the rally, the Star reports that the locals ambushed the leaders and climbed the dais where the leaders were in an attempt to get to them. The leaders had no choice but to call off the rally and scamper for safety.

Their protection was only dependent on the ability of their bodyguards to withstand the pressure from the charged locals leaving some of them with injuries. However, swiftly they managed to get out of sight before the situation turned ugly.

The leaders had been campaigning for Raila Odinga and his quest to become the fifth president of Kenya. They also castigated the rival groups particularly the Kenya Kwanza Alliance faction led by Deputy President William Ruto who is its presidential candidate.

Joho had taken issue with Kilifi Governor Amason Kingi who exited ODM and formed his own party which was an affiliate member of Azimio only for him to later join the deputy president.

Their meeting today came just a day after Ruto toured the sports complex in Malindi, just a few metres from where they were. Odinga is in the Western region in what his Director of Communications says is a special political assignment in the locality.