Battle For The Mountain: Who Will Capture The Mount Kenya Votes? Kiunjuri Speaks 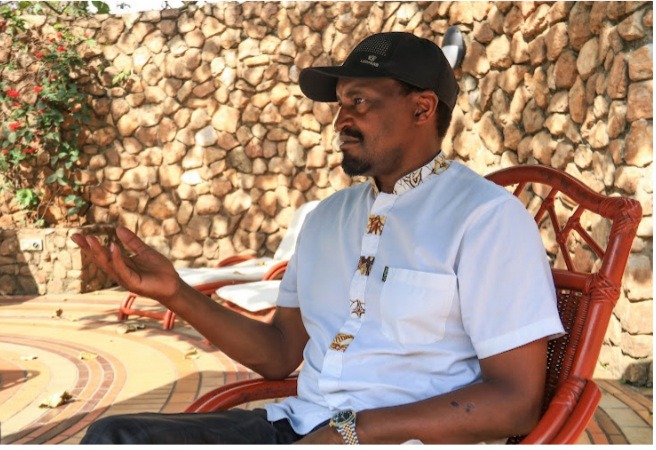 KIUNJURI: TSP chief Mwangi Kiunjuri during an interview with The Star at the Serena Hotel on Wednesday, October 6.

Presidential aspirants are riveted on Mount Kenya as they fight for the region's six million votes. To court the voters too much, they promised to choose running mate of the Mountain.

Central Kenya has no unusual successor for President Uhuru Kenyatta. So which prominent leader has the best chance of carrying the Mountain or extracting a large chunk of it? ODM leader Raila Odinga, DP William Ruto, Kalonzo Musyoka from Wiper or Musalia Mudavadi from the ANC?

Star political journalist Julius Otieno spoke to TSP chief Mwangi Kiunjuri on Wednesday at the Serena Hotel to discuss Mount Kenya and beyond.

Political parties have stepped up their activities before 2022. What is TSP doing?

The Service Party, launched in June 2020, is a grassroots party that understands the needs of the people and the bottom-up business model. We have offices in 27 counties, applicants in 19 counties and we are expanding.

TSP believes that a party should be based on issues, policies and programs. We are opening offices and popularizing the party and our candidates for the 2022 elections. We are strengthening our secretariat at headquarters and at the regional level. We are preparing nomination rules, a code of conduct and a nomination committee. We make sure to respect the law on political parties.

Will TSP present a presidential candidate?

A party does not necessarily need a presidential candidate to be strong or sensitive to the problems of the people. In many democracies, such as Germany, there are many strong parties but they did not present presidential candidates. Kenyan parties were formed as specialized electoral vehicles. PNU, Narc and now Jubilee had big names but fell apart early.

Is the leader of TSP preparing to become a running mate?

I am not the only person from Mount Kenya qualified to be a presidential running mate. We have so many leaders and all of them are qualified. It therefore depends on the qualifications sought by the candidate. Some candidates may want silent and passive running mates, while others may want assertive people who will campaign for them.

Are you planning to be DP William Ruto's running mate?

The vice-president's seat is not the most comfortable if it is not respected. This is the last seat we want. It is the most disrespectful office in this country.

You can become very powerful and respected without being a vice president.

Is TSP looking for an alliance with DP Ruto's UDA?

TSP supports the partnership on key national and regional issues. Our first choice is that person who articulates the issues that are dear to us. TSP has irreducible minimums. We want the security of people and the right to own property. Assure us that you allow Kenyans to do business anywhere and not destroy business. Support agriculture. Support farmers. At least 10 percent of the budget should be spent on agriculture.

The DP has officially declared that the small parties should be dissolved [and join the UDA]. Are you going to dissolve the TSP?

We won't, we are not a small party. We are present in 27 counties and have applicants in 19 counties. So if the DP wants the small parties to merge, TSP is not one of them.

No one is going to sit somewhere in a corner and feel because they are so popular and can sweep others that they are qualified to dictate. We are free [to decide] for ourselves. We do it either inside government or outside. This is why I have a lot of respect for Musalia Mudavadi. It has been absent from Parliament for a long time, but it has never lost its relevance.

DP Ruto is the man to beat in Mount Kenya?

It is too early to predict who will get the votes from Mount Kenya. Like I said, the wind blows really fast when it's about to rain. But when the rains start, the wind disappears. A farmer expects a bumper harvest, only for rains or wind to destroy his crops.

What is Raila's fortune in Mount Kenya?

It's very unpredictable. Until three weeks ago, no one thought Raila could address a gathering of 10 people. No one thought that anyone could listen to Raila. People knew him as a man from the boardroom. They thought that when Raila visited, stones would fly.

But three weeks ago it drew huge crowds and people listened. It used to be unimaginable.

Two months ago there had been no conversation on Raila in Mount Kenya. But people are talking about him now and that should worry a lot of people.

What does the Mt Kenya Leaders Forum do?

This is a forum of like-minded leaders who want us to be more united and forward-looking. We are focused, experienced and articulate people's issues. Even the Constitution recognizes a community of interests. The regional blocs formed by the governors are communities of interest.

We have created a forum to push the next government to respond to the needs of our people. We are very open-minded and a technical team is working on the issues that presidential candidates should engage in if they want our votes.

Does the forum support a particular person for the post of president?

No. We are Liberals. Some support Raila Odinga, some support William Ruto, others want Mudavadi, Kalonzo and others. We want a leader to take care of our problems. We only appointed Martha Karua as spokesperson. Everything she says is a decision of the forum. We can recruit more leaders to defend our interests as a united team.

Did the people of Mount Kenya and their leaders choose someone they would support in the presidency?

We all know the candidates and what they believe. We have heard them and know what they stand for. We know who supported the violence. We know who is a statesman.

Where there is turmoil, there is no order. It's time to calm down and let ourselves think.

You cannot predict what will happen in Mount Kenya. You can be a farmer whose crops grow well. But as the harvest approaches, strong winds or heavy rains destroy everything.

What is your assessment of the performance of Jubilee and President Uhuru Kenyatta?

They have concrete projects. In terms of infrastructure - roads, water, standard gauge rail and others - they have performed well.

However, big plans do not make themselves felt. People have no money. Most of the people who benefited (were paid) from these projects are international entrepreneurs. Unfortunately, they repatriated the money to their country, leaving the Kenyans with no money.

That is why we have a problem with this government. He carried out many large projects, mainly thanks to loans. Kenyans pay through the nose. Taxes are exorbitant, fuel prices are skyrocketing.

You are building an expensive highway but people are running out of vehicles to use it. People are hungry. They do not have money. Isn't that putting the cart before the horse? They should have invested that money in agriculture.

The next government is expected to freeze new projects. Complete the current ones first. Pay people and make sure they have money in their pockets. Otherwise, all of these complex business models won't work.

What's your advice for Mount Kenya?

We need to be calm, stop the excitement and the empty rhetoric. It's time to sit down and fix our problems. The people of Mount Kenya should elect the leaders of their choice. Anyone who asks people to vote three because they want soldiers in Parliament will be an enemy of the people.