By Mwokozi (self media writer) | 2 months ago

Kiharu member of parliament hon Ndindi Nyoro has finally agreed with Jubilee party legislature Jeremiah Kioni over an article that is in the building Bridges initiative report and can help Kenyans. 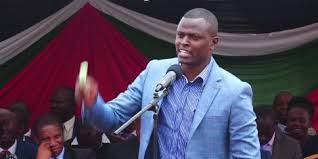 Talking in bungoma county today,the deputy president William Ruto's legislature said that the building Bridges initiative report was rejected due to the prayers that Kenyans conducted and that it was a bill that was dead on arrival.

Nyoro said that the bill which Jeremiah Kioni is trying to bring in parliament of creating a position of two deputy Presidents and a prime minister is also a dead bill and he should not force it to Kenyans.

However, Ndindi Nyoro said that the story of constituency development funds that was supposed to be increased by the BBI is much welcomed and not the story of positions.

"I want to tell my friend Kioni that the BBI was rejected by the prayers from Kenyans and also that the bill he is trying to force us with in parliament of creating extra positions of two deputy presidents is a dead bill. I want to tell him that let him stop telling people that BBI was to bring Money,let him bring that bill of increasing the money and not creating positions," he said.