By Watchtower.com.ac.ke (self media writer) | 4 months ago

Gladys Wanga who is the first woman to be elected as a governor in the entire Nyanza region is moving faster to restore the mess that her county suffered from the last ten years which made Homa Bay County one of the less developed counties as compared to other counties across the country. 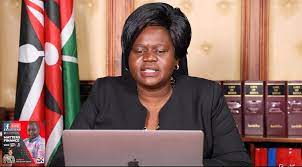 During her campaign, he promises the people of this county that she will ensure that she delivered to the people of Homa Bay. A few weeks ago she flags the delivery of medicine by KEMRI to rescue poor health services in the county referral hospital which was a big issue during the reign of the ex-governor Awiti.

During her first speech in the county assembly, she revealed that the county is capable of collecting 1 billion annually from the revenue that could stimulate development, unfortunately, due to corruption this revenue does not reach the county.

According to her reports, Homa Bay is currently losing 34 percent of this revenue. This has triggered her concerns and attention which has made her suspend all revenue collection and formed a committee to help her in the investigation where the revenue of the people of Homa Bay is disappearing too.

She said, "Indeed honourable members, our county is now collecting negative 34 percent of the revenue that was collected by the former government, It is after this suspicious trend and fluctuations that triggered a reaction in my office to suspend revenue collection as we assess the loopholes which might have led to this.”

This could be one of the huge and ruthless steps that Gladys has taken to curb loopholes and also to end the ghost workers in this county which could help her to put everything in order.