EXPLAINED: See What Parliament Will Be Discussing Today

By HabarIbuka (self media writer) | 1 year ago 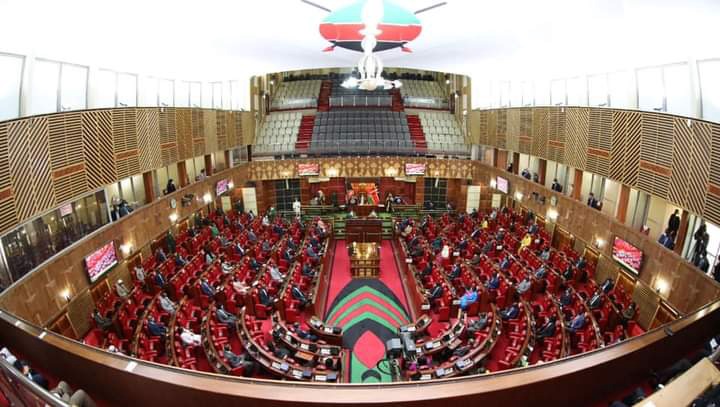 The Bill is Sponsored by the Chairperson of the Departmental Committee on Finance and National Planning on instruction from the Cabinet Secretary for the National Treasury and Planning, and will be coming for First Reading on 22nd December, 2020.

The principal object of the Bill is to amend the Third Schedule to the Income Tax Act, Cap. 470 to reverse income taxes, specifically Pay As You Earn and Corporation Tax to the rates that existed before the enactment of the Tax Laws (Amendment) Bill, 2020(pre-Covid.)

Specifically, the Bill seeks to amend the provision on Minimum Tax, that is, section 12 (D) of the Income Tax Act to correct an error, to ensure the provision is implementable. It is intended to provide that Minimum Tax shall be payable by a person where the Instalment Tax payable by that person is under section 12 is lower than the Minimum Tax.

Further the Bill seeks to amend the Income Tax Act by amending the top tax rate for Pay As you Earn and Corporation Tax from the current 25% to 30 %.

The Bill further proposes to amend section 17 of the Value Added Tax Act, 2013; the provision on Credit for input tax against output tax, to provide that a registered person who is a manufacturer may make a deduction for input tax with respect to taxable suppliers made to an official aid funded project as may be approved by the Cabinet Secretary.

The principal purpose of the Bill is to amend section 30 of the Judicial Service Act, No.1 of 2011 in order to insert a provision empowering the Judicial Service Commission to commence the process of recruitment of a new Chief Justice at least six months before the expected retirement date or expiry of the term of the Chief Justice under Article 167 of the Constitution.

The Bill is sponsored by Clement Muturi Kigano, Chairperson, Departmental Committee on Justice and Legal Affairs and is scheduled for First Reading on 22nd December, 2020.

The principal object of this Bill is to amend the Anti-Doping Act, 2016 to harmonize the legislative framework with the 2021 World Anti-Doping Code and Regulations. This effort will aid in the achievement of compliance by Kenya to the internationally adopted Code and facilitate the continued participation of Kenyan athletes in local, regional, and international competitions, while appreciating the relevance of curbing doping in sports.

Having ratified the UNESCO convention against doping in sport in 2009, Kenya became a Member State and was thus bound to the International regulations on Anti-Doping.

The first World Anti-Doping Code (Code) was adopted in 2004. It was amended and a new one adopted in 2009. The current Code was ratified in 2015 and is due to be replaced by the 2021 Code which will become operational on 1st January 2021.

The Bill is scheduled for First Reading on 22nd, Tuesday and passage in all its stages because the deadline for compliance is 31st December 2020.

The Business Laws (Amendment) (No. 2) Bill, 2020 sponsored by the Leader of the Majority Party, Hon. Amos Kimunya, was published on 14th December 2020.

The Bill seeks to make several amendments to various statutes to facilitate the ease of doing business in Kenya.

The Bill is scheduled for First Reading on 22nd December, 2020.

The Community Health Workers Bill, 2020 sponsored by Hon Martin Peters Owino, MP, Ndhiwa Constituency, is a Bill to make provision for the training, registration and licensing of community health workers; to regulate their  practice; to provide for  the  establishment, powers  and functions of the  Community Health  Workers Council of Kenya.

PART  I (Clauses  1-2) of the Bi11 provides for preliminary provisions of the Bill including the short title and the interpretation clause.

PART IV (Clauses 26-28) of the Bill deals with the discipline of community health workers.

PART V (Clauses 29-33) deals with financial provisions. The sources of funds for the Council are outlined in clause 29. The Council is required to comply with prudent financial management systems including the provisions of the Public Audit Act, No. 34 of 2015.

The Bill is scheduled for first reading at the National Assembly on 22nd Tuesday, 2020 December, 2020.

The Bill is sponsored by Honourable Joshua Kimilu, MP and is scheduled for First Reading on 22nd December, 2020.

The Bill provides for establishment of the Council of the Institute comprised of nine members with the Executive Director being an ex-officio member.

The Bill delegates legislative power to the council of the institute to make regulations for the carrying into effect of the provisions of the bill. The Bill provides for various offences including the offence of holding out as a registered social work.

professional and prescribes a penalty of a fine not exceeding five hundred thousand shillings or a to imprisonment for a term not exceeding two years, or to both. The Bill does not provide for appropriation of funds to the institute by Parliament.

The Bill is sponsored by Honourable Martha Wangari, M.P, and is scheduled for First Reading on 22nd December, 2020.

The object of the Bill is to ensure that the Cabinet Secretary establishes at least one registration area in each constituency.

The principal object of this Bill is to establish the Public Debt Management Authority as an independent body to manage the public debt in the country at both levels of government. The country’s debt is rising at an alarming level and there is need to manage the same to protect the current and future generations. The Authority shall succeed the Public Debt Management Office currently domiciled at the National Treasury.

The Authority shall be managed by a Board whose Chairperson shall be appointed by the President upon approval of Parliament. The approval by Parliament is to promote the independence of the Board. The Board shall also recruit a Registrar whose functions shall include to establish and maintain separate registers for loans, guarantees and securities in which shall be recorded details of all loans, guarantees and securities issued by or on behalf of the national and county governments. This will enhance transparency as at any time a person can establish the number and amount of loans and guarantees taken by both the national and county governments.

The Public Debt Management Authority Bill is a Bill sponsored by the Member for Nambale Constituency, Hon. Sakwa Bunyasi. It is scheduled for First Reading on 22nd December, 2020.

It mandates procuring entities to require successful bidders to give preference to Kenyan brokerage firms where brokerage services are required. This is aimed at promoting the growth of local industries. Further it requires procuring entities seeking specialised skills that are not locally available to ensure that the specialised skills are procured for a defined period and that the successful bidders transfer skills to locals.

The Bill is scheduled for for First Reading on Tuesday 22nd December, 2020.

The Alcoholic Drinks Control (Amendment) Bill, 2020 National Assembly Bill No.35 was published on 15th October, 2020 and is sponsored by Member of Parliament for Wundayi Constituency, Danson Mwashako Mwakuwona, MP.

The principal object of the Bill is to amend the Alcoholic Drinks Control Act, No. 10 of 2010 in order to ensure that packaging of alcoholic drinks is in quantities not below seven hundred and fifty (750) milliliters. This is to curb the menace of excessive drinking occasioned by the sale of very low packaged quantities of alcoholic drinks and making it inaccessible to the youth.

The Bill further seeks to provide for deposit refund scheme for the purchase of alcoholic drinks in glass bottles. This is will boost recycling of glass bottles and inevitably reduce environmental pollution by cutting waste.

The Bill is scheduled for First Reading on Tuesday, 22nd December, 2020.

The principal object of the Bill is to establish a legal framework for the training, registration, licensing, practice and standards of Information Communication Technology (ICT) professionals in Kenya. In particular, the Bill-

(a) provides for the establishment of the Information Communication Technology Practitioners Institute, its composition, powers and functions;

(b) establishes a Council as the governing organ of the Institute.;

(c) contains provisions relating to the registration of ICT Practitioners.;

(d) stipulates the requirements for such registration, the keeping of a register containing particulars of registered persons and the manner in which alterations may be made to that register;

(e) contains provisions relating to the licensing of ICT Practitioners;

(f) provides for the issuance of practicing licenses and the duration of those licences;

(g) contains enforcement provisions and defines among other things what constitutes professional misconduct, and provides for disciplinary proceedings by the Council against an errant practitioner;

(h) provides for the removal, suspension or cancellation of a member from the register, and the effect thereof;

The Bill is sponsored by Honourable Godfrey Osotsi, MP and is scheduled for First Reading on 22nd December, 2020.

The Constitution of Kenya (Amendment) Bill, 2020.

The Bill is sponsored by Honourable Jeremiah Kioni, MP and is scheduled for First Reading on Tuesday, 22nd December, 2020.

The principal object of this Bill is to amend the Children Act, (No. 8 of 2001) to be in conformity with the Constitution.

The Bill seeks to vest equal responsibility for parental care and protection of a child in both the mother and the father whether they are married to each other or not. The Bill further provides that neither the father nor the mother of the child shall have a superior right or claim against the other in the exercise of such parental responsibility.

The Bill seeks to amend the following sections of the Act─

a) Clause 2 of the Bill amends section 24 of the principal Act to make it mandatory for the father and mother of a child born to have parental responsibility of the child whether the parents were married at the time the child was being born or did not subsequently get married;

b) Clause 3 seeks repeal section 25 of the Children Act that provides for acquisition of parental responsibility by a father; and

c) Clause 4 of the Bill seeks to amend section 27 of No. 8 of 2001 as a consequential amendment to the repeal made in clause 4 and 5 above on the need for one to acquire parental responsibility.

The Bill is sponsored by Honourable Peter Kaluma, MP and scheduled for First Reading on Tuesday, 22nd December, 2020.