- The Gariza township Member of Parliament Hon Aden Dwale loses his speech as When President Uhuru Kenyatta passed closer to him while holding a press release.

- This has brought him criticism with his critics terming him "Coward".

The Gariza township Member of Parliament Hon. Aden Duale has come under sharp criticism over his lose of cool while holding a press release shortly after President Uhuru Kenyatta had addressed the nation. 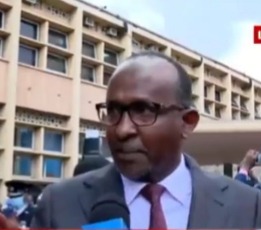 Duale, who was castigating the President saying "I want to talk to the people who wrote the president's speech - you should give the president a summary speech"

While speaking on a NTV, Duale pointed a finger at the President saying he missed the point.

Duale attacked the president for coming to parliament at 3:45pm instead of 2pm as the constitution states.

"What the president did today was just to abuse the legislators, and he went further to attack the Judiciary"

At that particular time the president suddenly appeared from behind and a seemingly fearful Duale lost his his cool, speech and confidence that he stammered.

His critics, taking to Twitter have snatched the orportunity to fault Duale saying, "What happened to Tanga Tanga Spokesman Aden Duale, he became stammerer all over a sudden. UDAku Iliisha, Ogopa rais."

RIP: Sad, Another Kenyan Lady Reportedly Dies After Being Shifted From Saudi To Egypt By His Boss