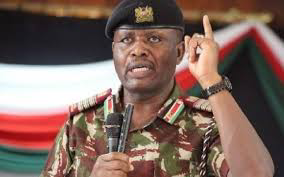 Raila has received a huge boost a head of August poll. Azimio LA Umoja is growing big each day since many politicians ate decamping to Azimio. Today Former Rift Valley Regional Commisioner George Natembeya has spoken about his political future, as he begins the hunt for the Trans Nzoia Governor seat in 2022.

Natembeya who was speaking during an interview with Radio Citizen on Monday, said he was fully behind President Uhuru Kenyatta, and the 'Handshake', reiterating that he would swing to the side the Head of State would support.

During the interview, Natembeya says before he threw his hat in the ring, he had consulted President Uhuru as well as the Interior Cabinet Secretary Fred Matiang'i.

He says the Head of State as well as the Interior CS supported his move to now seek an elective seat in the coming polls. That's a big win in Azimio. Do you think Natembeya vowing not betray Uhuru will improve Raila's chances in winning the August poll? Feel to comment and also share