A few days ago former prime minister Raila Odinga announced his social welfare plan if he becomes the 5th president of the republic of Kenya. He made it public that if he becomes the head of state the poor households will be receiving a stipend of ksh.6000 per month.

On his recent vote hunt tours Raila made it public that if he forms the government a social welfare program would be rolled out reaching around 8 million Kenyans within the first year of his tenure.According to Odinga the program would aim at bridging the poverty gap in the country. The latter was not well received by the deputy president. On Saturday, 16th of October while addressing a gathering at Kongoea market Ruto said that Kenyans, especially those who are jobless are not interested in hand outs but opportunities. 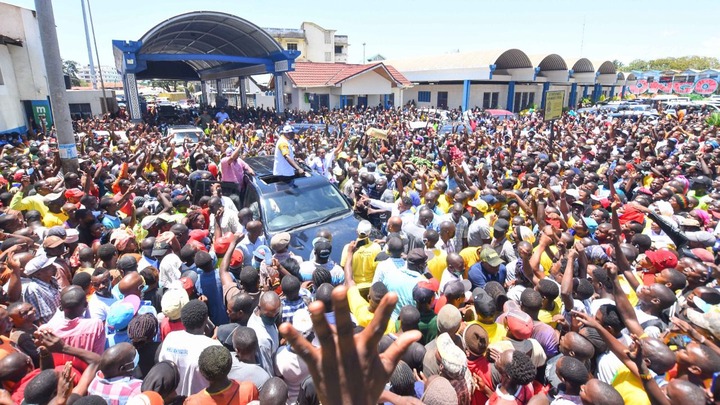 As he commenced his three day vote hunt tour in coastal region the Deputy president did not spare Raila's social welfare program narrative. Ruto blamed Raila for failing to come up with a plan that will help Kenyans get jobs and business opportunities. He criticized Odinga for failing to come with agendas that will help the hustlers create job opportunities, "Namwamba bwana kitendawili karibu, karibu tuongee mambo ya Hustler na mambo ya uchumi, lakini usituletee hand out, Hawa wakenya hawataki hand out, Hawa wakenya vijana wanataka kazi," Ruto said.

JUST IN; Top Premier League Match Could be Postponed Today After Latest Development