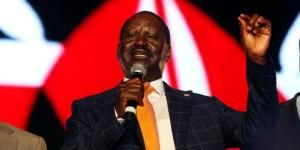 The Orange Democratic Movement (ODM) leader, Raila Odinga, has revealed what people who were taken to Nyayo House, the torture chambers in the 80s and 90s, went through.

Addressing mourners at the funeral service of Jaramogi Oginga Odinga's personal physician and Nyayo-era detainee, Dr. Odhiambo Olel, on Friday, January 21, the former Prime Minister stated that it was important for the current generation to learn what the past generation had to endure.

"You are likely to repeat the same mistakes of the past unless you can learn from history. That is why it is important to remind our newer generation where we came from as a people," he explained.

Raila noted that many people do not know about Nyayo House yet it played a significant role in the democracy of this country.

He revealed that the building has torture chambers in its basement which are painted in different colors. One has black walls, another has red walls and there is a room where all the walls are white.

According to him, the magnitude of a person's mistakes determines what room they are taken to.

"It depends on your category, if you are somebody who is meant to be tortured seriously you are taken to the room where all the rooms are black," Raila explained.

Further, he divulged that when a person is arrested they are blindfolded and put in the back of a car. They are then driven around town five times before being taken to the torture chambers.

After being taken to the cells, a tap is opened and the floor of the room where the detainee is kept is filled with water. In the morning, the person is handcuffed and blindfolded before being taken to a lift which takes them up to the 23rd floor.

There, the detainees are asked to confess or be thrown to the ground, and sometimes, people have to make false confessions to live another day.

"It's not just a threat, people were thrown from the 23rd floor of Nyayo House and they fell down and died. That happened. We had a bad regime at that time."

Raila stated that Olel was convicted and taken to Kamiti for committing no crime yet the current generation can hurl abuses at the President and nothing will happen to them because of the democratic space that was opened by people who struggled in the past.

In 1982, the ODM leader was accused of plotting against President Daniel Arap Moi and was imprisoned without trial for six years.

After his release, Raila was twice arrested for campaigning against one-party rule, and in 1991 he sought refuge in Norway.