How Peris Tobiko's Defiance is Building Her Political Empire

By Harsenews.com (self media writer) | 3 months ago 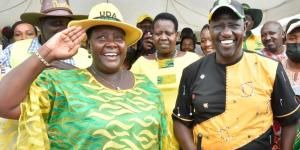 Kajiado East Member of Parliament Peris Tobiko described by many as 'Kajiado Iron lady' has capitalised on various situations termed as defiance to scale up different political ladders in the country.

Her act of dissent was re-ignited after a public drama with her husband Kishanto Ole Suuji who accused her of hosting Deputy President William Ruto without her permission.

To prove her subversiveness, Tobiko made it clear that she cannot be stopped nor cowed to drop her ambition to become the next Kajiado Governor.

“I’m not a coward, some family members were called to address the press that they were not aware of the meeting,” she said on Friday.

“I made a decision and will not be stopped. I want to work for the people of Kajiado,” she said.

Her act of opposition started back at home. She rejected several attempts by her father to marry her off at the age of 13 and 18.

She stood her ground convincing her father to allow her to continue with her education. And indeed her act of defiance paid off, she now holds both a Bachelor of Arts degree in Political Science and a Masters degree as well also in Political science from the University of Nairobi.

Her decision to venture into politics was further marred by even more instances of insubordination. In 2013 she was historically elected into parliament.

The Maasai elders were so much opposed any annoyed by her win. She openly defied the warning that made them cast a spell on her political ambitions. They argued that she went against the patriarchal norms of the Maasai community. But, 8 years down the line, she is still kicking and rising on the political caliber.

In 2017 she even got re-elected on a Jubilee ticket beating several other men who were contesting.

And now, her next political move has even created a greater rift with her elder brother, Environment Cabinet Secretary Keriako Tobiko. CS Tobiko does not see eye to eye with the DP and is part of the leading luminaries in Maasailand who have vowed to ensure Raila succeeds President Uhuru Kenyatta.

Initially, they were on the same handshake bandwagon before Peris made a U-turn pledging her allegiance to United Democratic Alliance (UDA) affiliated with Ruto.

The CS has teamed up with Kajiado Governor Joseph Lenku to fight off UDA, but with Peris's departure, their mission is somehow punctured.

"You know me well, I can never walk together with my brother Lenku we are like water and petrol and therefore I will be contesting for governorship on a different party," she recently announced.

Before even she jumped ship to join Jubilee in 2012 then known as The National Alliance (TNA) she had been groomed by Raila who helped her survive the Maa community political storm. But she still decamped and openly defying the former Prime Minister.

In Jubilee, she was so close to President Uhuru. Her decision to join UDA will most likely break their bond.

Despite all those ups and downs, still, a new wave trying to block her gubernatorial bid has emerged. Her opponents have capitalised on the fact that her husband comes from Narok and told her to seek leadership in her husband’s home county.

She has been re-branded as a foreigner. Initially, especially in 2017, she defied the odds and used the foreigner tag to outsmart her opponents.

But now, the bigger question remains, 'will she still ride on defiance to break all the barriers and unseat Governor Ole Lenku in the 2022 General election or will her political empire go down rambling?'