Kenya Kwanza presidential flagbearer, Deputy President William Ruto, defended controversial remarks made by his running mate, Mathira Member of Parliament, Rigathi Gachagua, on government expenditure on corporates, during his interview on Inooro FM, on May 24, Hon Gachagua stated that it would be good if the government will invest in multiple MSMEs rather than lump up huge investments into a single corporate.He argued that having one giant company paying taxes did not generate as much revenue as thousands of small businesses who will pay a lot of tax to the government, even if they are small. 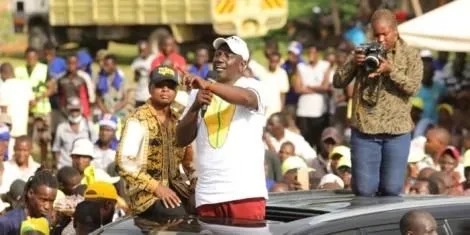 To defend Gachagua's remarks, Dp during Kenya Kwanza rally in Witu, Lamu county, Ruto urged that Rigathi Gachagua was right by calling on the government to invest more in the youths just the way it has done in parastatals and other corporates like Safaricom and Kenya Airways.

The Deputy President further pledged that should he win August General elections, his administration will increase resources allocation to the youths from Ksh100 million annually to Ksh150 million at sub county levels.

However, the remarks sparked a mixed reactions from Kenyans who called him out for allegedly blasted him for wishing the fall of larger corporates to fund MSMEs. This is because the larger corporates gave the ability to employ many people and hence should be respected.

Huge Transfer Updates On Lisandro As Ajax Chiefs Arrived In London Amid Links To Arsenal & United.

How Much It Costs To Print One Ballot Paper, IEBC Reveals