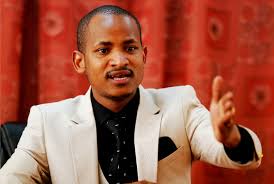 Paul Ongili alias Babu Owino is a Kenyan politician and a former students president at the University of Nairobi, he has since then served as the member of parliament for Embakasi East constituency in Nairobi county.

Babu Owino first became an elected member of parliament in 2017, he was re-elected on 9th August 2022 on an Orange Democratic Movement ticket and he has maintained his status quo in the party.

A few days ago, Babu Owino protested against his party move to award available leadership slots in Parliament. He revealed plans to go for higher mandate from the Kenyan youths if the party fails to restore the place of youthful politicians in the party. This left many speculating that he wants to seek presidency in the near future.

A Kenyan on Facebook, has commented on Babu Owino's post, saying that he is wronging for the time Babu Owino will deputize Ndindi Nyoro for presidency. Babu Owino has responded back, telling the fan that Ndindi Nyoro who is the member of parliament for Kiharu constituency is a village politician, Babu opines that it is Nyoro to deputize him. 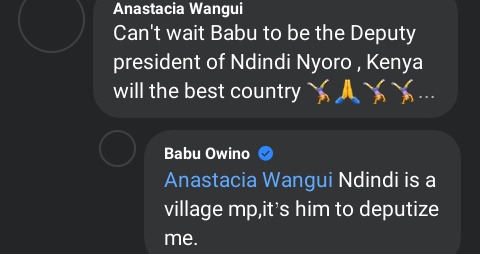