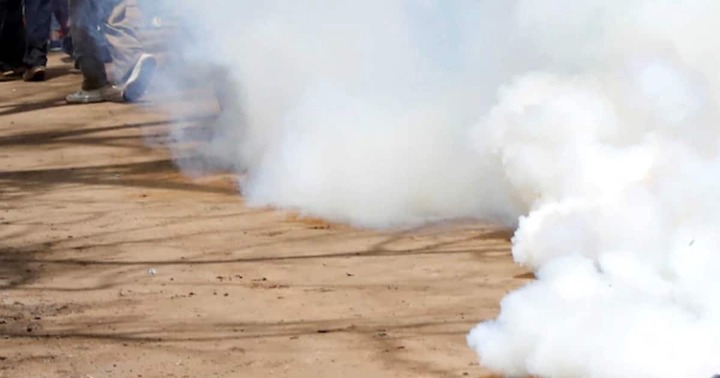 On Wednesday, police were forced to use tear gas against a group of protesters who were purportedly backing independent governor candidate Wangui Ngirici in Kirinyaga.

This comes after the crowd tried to storm the counting center for the Gichugu constituency, which is taking place at Kianyaga high school.

Geoffrey Gitobu, the returning officer for the constituency, said the violence started when a presiding officer tried to cut in front of the officers in the lengthy line they had formed to bring the results of the polls to the counting center.

She then went looking for a different entrance to the center while toting her election materials in the hopes of being attended to more promptly.

Agents working for Waiguru and Ngirici, who had been in a tight race, are believed to have argued after the shift. When Ngirici's fans smelled foul play on the Kutus-Kianyaga route, they attempted to attack the center by throwing stones and blocking traffic.

They were unsuccessful, however, since the security guards there were well-armed and vigilant. Even Waiguru, who has a large online following, was not amused by the behavior and spoke out against it.

"Two voting boxes containing governors' ballots enter Kianyaga through the rear entrance during the day, prompting questions of rigging." They have to go, and the counting has to stop. "This was stated in the post."

Ngirici, likewise, did not hold back when responding to Waiguru on social media. "During your time at NYS, you had the sole key we had to the one hidden passageway. A TUPO WEB SITE! " The linguist Ngirici remarked.

The outgoing female representative pledged on Tuesday that her staff will be vigilant in securing her votes and preventing any rigging of her hard-won triumph.

However, Gitobu reported by phone to the Star that verification procedures had restarted at the tallying center after two doomed ballot boxes had been set aside to await word from the agency.

Mathews Mang'ira, county commander of the police force, issued a stern warning to politicians not to incite violence among their supporters or face the wrath of the law.

While speaking on the phone with the Star, the county police chief echoed these sentiments, urging everyone involved in the verification process to remain calm, tolerant, and patient.