Days after returning to the country, President Uhuru Kenyatta is yet to clear his name from the Pandora Papers exposè that linked him to offshore accounts and the Head of state had promised to fully address the issue after his trip to the United States.

Citizen Television news anchor Yvonne Okwara on Thursday, October 21 during the news gang session directed questions to President Uhuru Kenyatta asking for him to honour his promise and immediately respond to Kenyans about the masterpiece.

While In the company of Joe Ageyo, Linus Kaikai and Francis Gachuri, Okwara stated that the President owed Kenyans an explanation as to why they chose to keep some of their assets outside the country yet they have been holding powerful government positions since independence. 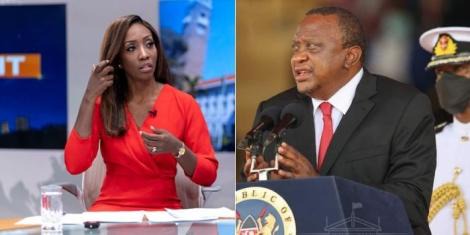 "The question of offshore accounts are fundamentally not outlawed but the questions raised are not necessarily legal ones but moral ones. Mr. President, the list of those mentioned is not a role of honor from mobsters like Rafael Amato to Jolo a known fugitive financier among others. So what are your thoughts on this? That those closely linked to you chose to invest and save so heavily outside the country. Is this truly a statement of your confidence and that of your family in the Kenyan economy itself? Why the choice in investing in trusts abroad and not in Kenya?" Okwara posed.

The outspoken journalist articulated that the questions being asked by Kenyans were not legal but moral ones and the Head of state should clear his name on the issue of tax avoidance as the Kenya Revenue Authority struggles to meet its targets in the country as this could send the wrong message to Kenyans who have faithfully been paying their taxes.