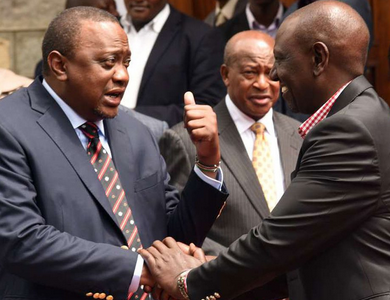 Countable hours after the Azimio La Umoja One Kenya Alliance camp canceled the rally that was expected to be held at Kamukunji Ground on Wednesday, November 30th, with an aim of engaging Kenyans on the move to oust the 4 commissioners of the Independent Electoral and Boundaries Commission (IEBC), details have emerged of backroom talks.

According to a report by NTV, the talks which started on Sunday evening involved President William Ruto, his predecessor Uhuru Kenyatta and the Azimio boss Raila Odinga, where Uhuru who is the Azimio chairperson allegedly told Raila to call off the rallies.

Raila last week said that he was going to hold rallies in different counties seeking views from the public on the petitions that want Juliana Cherera, Justus Nyang'aya, Francis Wanderi and Irene Masit ousted.

Ruto had said that the demonstrations were not way to go, with Deputy President Rigathi Gachagua challenging Raila to have his daughter Winnie Odinga as one of the protesters, although Interior Cabinet Secretary Professor Kithure Kindiki has assured the camp of security during the rally.

After the Azimio Parliamentary Group meeting today attended by Raila and Wiper party leader Kalonzo Musyoka, the Minority leader Opiyo Wandayi said that they postponed the rallies up to December 7th citing the move as due to the ongoing national examinations.