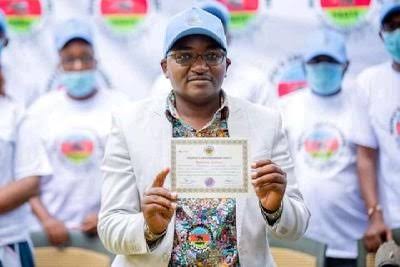 Today Juja constituency is headed to a by-election that's pits PEP candidate George Koimburi against widow to the late MP Susan Wakapee. Painful as it might be to Jubilee supporters however is that George Koimburi of PEP is unstoppable despite efforts by President Uhuru Kenyatta himself to compaign for Susan Wakapee.

Koimburi is banking on the support of the hustlers nation who believe in his political ideologies to change the lives of the people in Juja Constituency for the better something he has been doing when not elected. He has been on the ground helping the youth and the poor always providing different services to ensure they also succeeded.

Clearly looking at things on the ground in Juja constituency, Koimburi is the man to beat as he has proved what he is made of politically. Remember it's not his first time to vie in Juja given he has been on the ground before and proved effective though not on a jubilee ticket.

However today is here and really what's factual and fiction will be debunked at the ballot. Unless the government intimidates the supporters of the young man, Koimburi might really be unstoppable as he seems a tsunami that has strong and mighty political waves.

Remember as well that the deputy president William Ruto has many supporters in Juja who are as well looking forward to see George Koimburi elected as the Juja MP. The second in command did not field a candidate in Juja through UDA as he decided to support George Koimburi who he believes is a strong hustler who will really uplift the lives of the people.

Pupils Confused After Their Headteacher Commits Suicide in His Office