Nyeri Governor Mutahi Kihiga has defended himself against criticism for reprimanding Raila on his campaign strategy at a public rally in Nyeri County.

While on an interview at a local TV station on Sunday, November 28, Kahiga clarified that his sentiments on the ODM party leader’s history narrations were not a lecture but rather an expression of the opinion of residents of Nyeri. 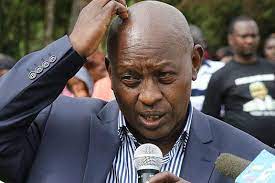 He went on to express that his sentiments were blown out of proportion and ought to have been taken in as a piece of advice for future campaigns.

"Where Raila Odinga is concerned, I was not lecturing him and I have no mandate to lecture him. I was just communicating the opinions of people of Nyeri. That was only the start of his tour. We were simply opening up on issues that would interest people of Nyeri," the governor explained.

Furthermore, Kahiga clarified that Raila was making advances in the vote-rich region and it would be better if the ODM leader clarified his plan and pronouncement rather than narrating his political history.

"The two days we have gone through with Raila, have been an eye-opener to a majority of people of Nyeri. They had never seen him or heard him. They have now realized who he is in a better manner,"

"However, there are those people who wish to package him historically and it's not a good place to dwell in since we are not walking into history. History is a good subject to study but a terrible house to dwell in," he clarified.

During his address at the Friday rally, the governor further urged the ODM party leader to woo Mt Kenya voters by proclaiming the percentage the region would get if the former Prime Minister is elected president.

Further, Kahiga reiterated his sentiments expressing that presidential candidate should pick a running mate from the region if they intend to get votes from the region.

"The only thing I know that moves Mt Kenya is the point at which they have one of their own and they rally behind that person. Only if one clearly shows they are capable of taking care of their interests, then the votes will come,

"The DP position in this nation is toothless, they don't deliver much for communities. We really want to negotiate as Mt Kenya on a package, not on a single position and it is important to say that equity is key in this country," he echoed.

Kahiga was responding in the wake of facing criticism from Raila and other leaders who accompanied the ODM leader. They clarified that history was significant and would help in enlightening voters.

"It is important to know where we have come from in order to have a better focus of where we are going. We would not want to make mistakes and that is the reason President Uhuru Kenyatta and I united in order to build Kenya," Raila clarified at the time. 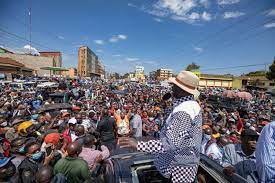