The petitions to oust the four embattled independent electoral and boundaries commission (IEBC) commissioners have been eliciting reactions from leaders across the political divide with azimio Brigade vowing to defend them against with they termed as witch-hunt.

In a bid to make a statement of intent, the former prime minister Raila Odinga had planned to hold meetings in Nairobi, Mombasa, Kisumu and other cities to collect public opinion about the treatment of the four.

However, on Tuesday, the opposition Coalition called off the planned Rallies until a future date.

According to a statement on Tuesday evening read by minority leader Opiyo wandayi, the alliance said it has only postponed the Protests until after the national exams.

Nevertheless, its now emerging that the move by Raila to call off the Rallies was arrived at after talks with the former president Uhuru Kenyatta.

According to NTV, uhuru had been approached by president William Ruto asking him to talk to Raila with a view to convincing him otherwise.

It's worth noting that president William Ruto met his predecessor on Monday during DRC peace talks held in Nairobi.

This underscores the very important role the former president is playing as an elder statesman in Kenya and the region. 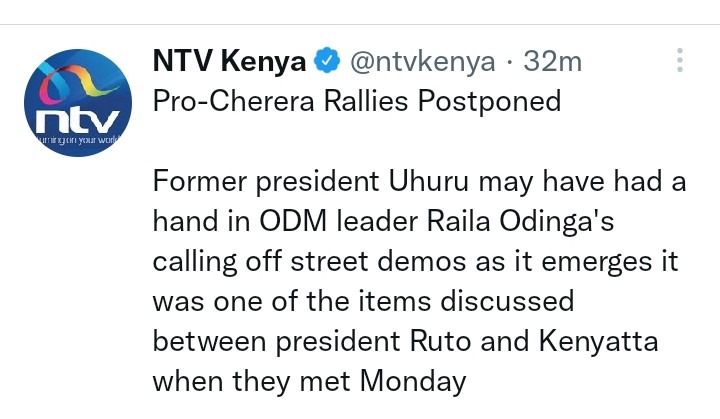