What Residents of Khayega Market, Kakamega Did to Ruto's Convoy as it Passed Through to Mumias Town 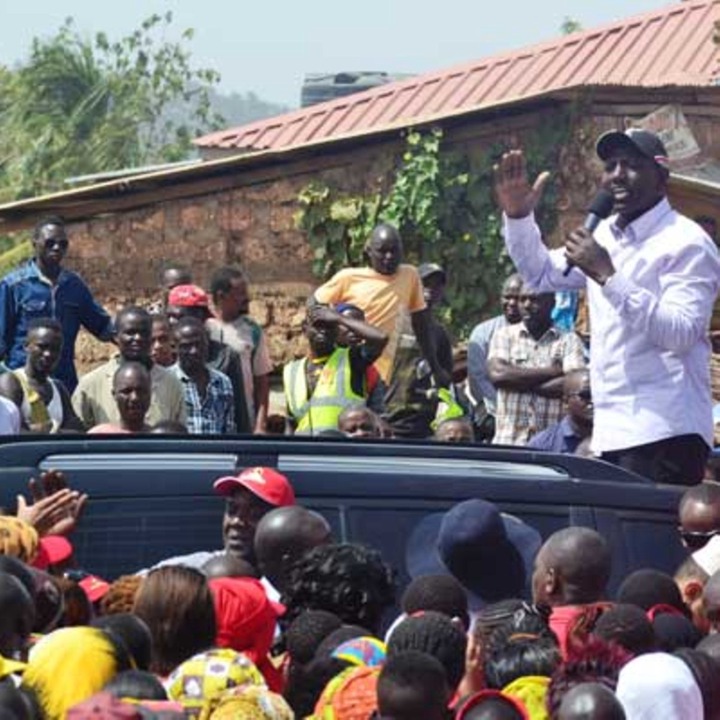 For the second time in less than two months, the deputy president William Ruto accompanied by former senator Boni Khalwale alias the 'bull fighter' and other few confidants has again today taken his campaign trail to the most populous county in the Western region, Kakamega county which is sometimes considered Orange Democratic party's backyard.

As he passed through to Mumias Town where he intends to hold a mega rally today, the deputy President's convoy of vehicles had difficult time passing through Khayega town, which afew kilometers to Kakamega Town. A group of joyous residents and supporters blocked the convoy demanding the deputy president to stop and hear their cries. Ruto gave in to the cry.

The convoy stopped and Ruto was forced to speak to the crowd from the top of his car. Residents appealed the DP to help them build a few shades to conduct their business, they argued the ones built by the county government are not adequate. They also cried out that the market's police post is in bad condition and needs renovation.

Ruto promised to look into their issues while appealing to them to turn out in large numbers to vote for him when time comes. He petitioned to them that they should critically asses his bottom up approach to solving the equation of the economy as it is the best compared to Raila's.

After the address, the convoy still had difficulty in passing through the jovial crowd. The DP's security personnel could be seen running back and forth trying to clear passage for the convoy. The crowd in branded yellow UDA t-shirts kept on shouting Ruto's name as he departed. A seemingly happy Ruro could not help it but smile back.

Raila visited the area weeks ago and he also pulled an enormous crowd of people in Kakamega town. Though the area is considered Raila's base, it is difficult to foretell who the region will go with in 2022.