By Martin_mburu (self media writer) | 9 months ago

In the Kiambaa political jungle, Three fierce competitors are rolling up their sleeves and warming up for the battle to be the next Constituency Boss.

Where it all begun.

Early March 31st 2021,Kiambaa residents work up to news of the passing on of their member of Parliament Hon Paul Khoinange who succumbed to covid - 19 leading to a by-election. However, the last year's kiambaa by-elections were held amid rising political temperatures in the country. A highly contested race between UDA candidate John KaWanjiku and Jubilee's Kariri Njama was witnessed with United Democratic Alliance winning the seat with a narrow margin.

The two were expecting to face of each other yet again in the August 9 General Elections but the race got sudden twist of fate after Jubilee party denied Kariri Njama the party ticket and instead awarded Damaris Waiganjo a newbie in Kiambaa politics. 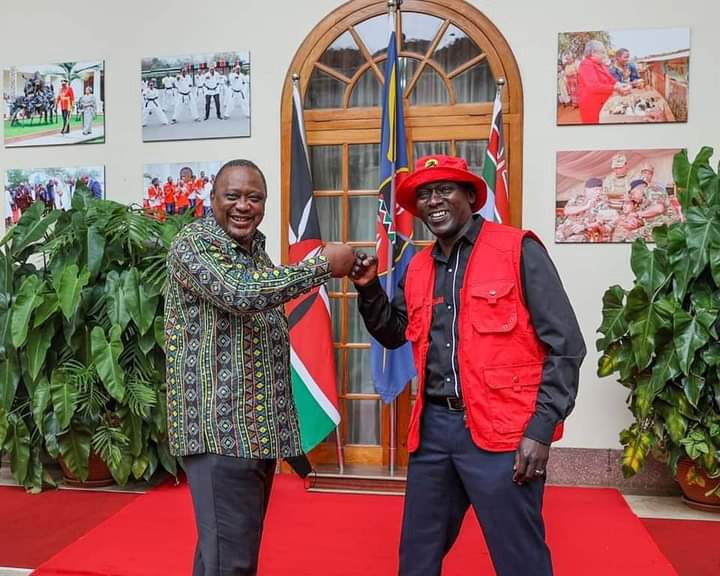 The move has brought out mixed reactions among the residents many questions on the integrity of the Jubilee party nominations process.

Charles Munyui, a political analyst thinks of the move as the greatest undoing of Jubilee party and feels that the party has failed both parties.

"I feel JP failed the two aspirants miserably. Consensus does not work this way.Consensus is about every stakeholder walking away with something,not just to please self but to also manage the expectations of their respective suppoters.Both are very strong contenders.The Party should not have played hide and seek with them.People are being appointed Ambassadors as we speak.Does it mean the same can not be applied to Kiambaa.Are we a cursed lot."He says.

Makas Mwangi a politician in the region says that Jubilee choose unpopular candidate citing it as an added advantage to UDA candidate who will have an easy win.

" It was a big mistake Jubilee has done to choose Damaris over Kariri Njama.

Damaris doesn't have a good following.

The battle will be Kariri and Kawanjiku but Kawanjiku will take it because of UDA being the favorite party." Mwangi says. 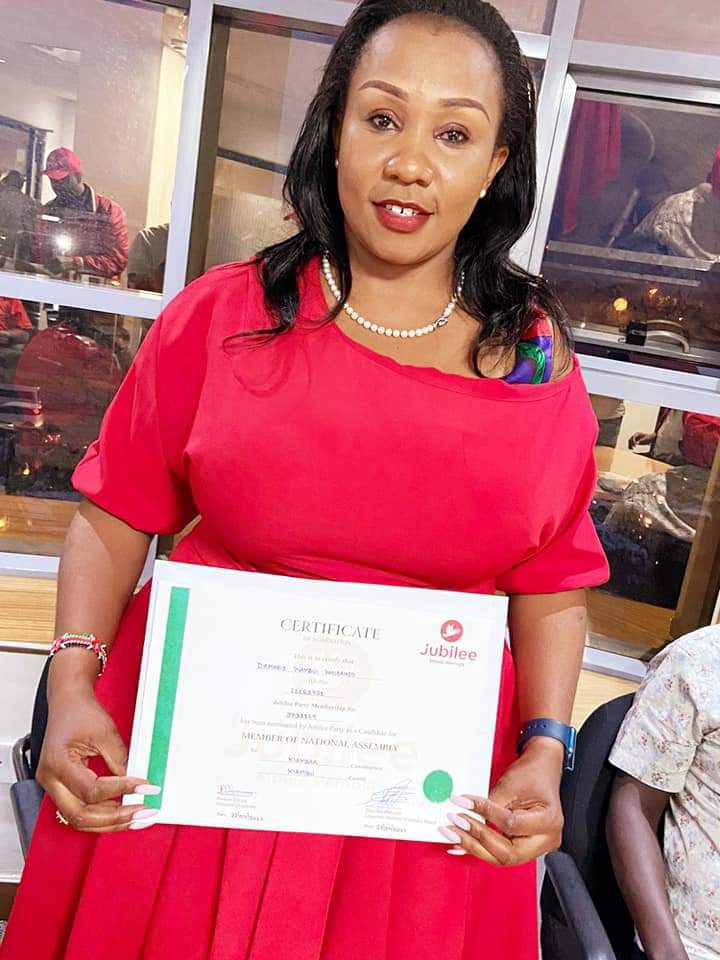 However, Willie Mbugua, a political Analyst and a politicians in Kiambaa welcomes the move by Jubilee party to award Damaris Waiganjo the party ticket.

He congratulated Damaris on her nominations and challenged Kariri Njama to accept the party decision.

Discontented with jubilee move to award her competitor the certificate, Kariri Njama decided run as an independent candidate.

In his statement, Mr Njama expressed his displeasure with the outcome of the party nominations and the awarding of certificate to Damaris who she referred to as undeserving candidate. 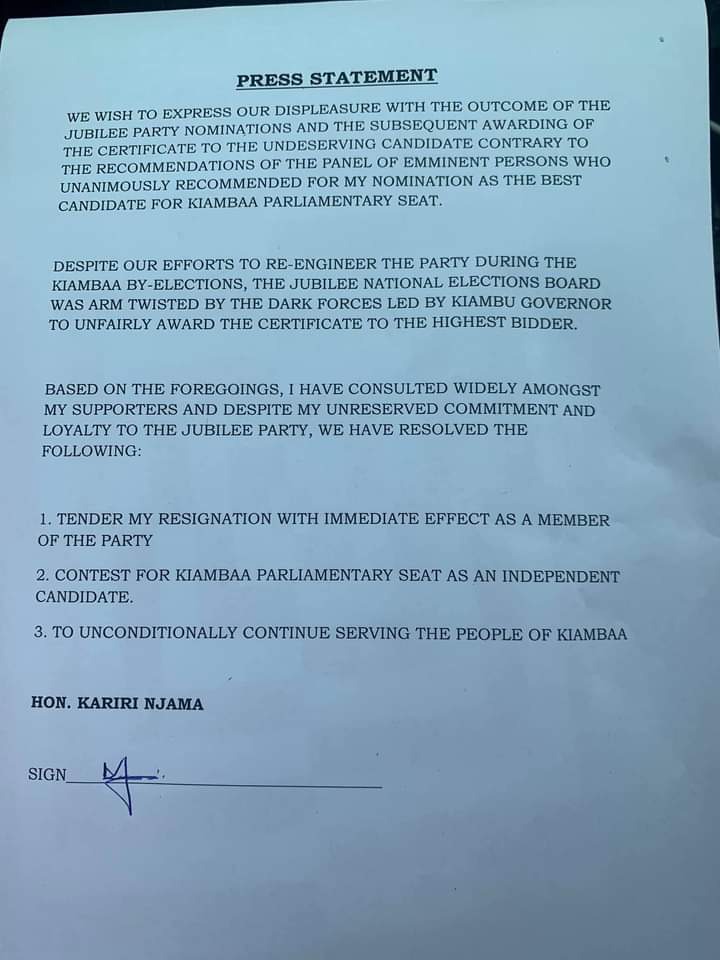 With Kariri Njama joining the race as an independent candidate, he will be facing off with incumbent John KaWanjiku of United Democratic Alliance, Jubilee party candidate Damaris Waiganjo and Tujibebe Wakenya party candidate Raymond Kuria.

According to the Independent Electoral and Boundaries Commission, the constituency has slightly over 96,000 registered voters,154 polling stations and five wards.

And as the aspirants warms up for a campaign like no other, Residents should expect a rigorous campaign period as all candidates pulls out their last card in their bid to win the seat.

For Kariri Njama, its a win or die situation. Having failed to secure the seat four times contesting against the late Paul Khoinange and the incumbent John KaWanjiku , He expects to fire out his last bullet. Only this time round on an independent ticket.

The incumbent, Hon John Njuguna is in a tight space to regain his seat or else make history as member of Parliament who served the shortest term in office having been elected during the last year's june by-election. The village Mp however, seems to be overworking and doing whatever it takes to lure the Kiambaa people to vote him again. 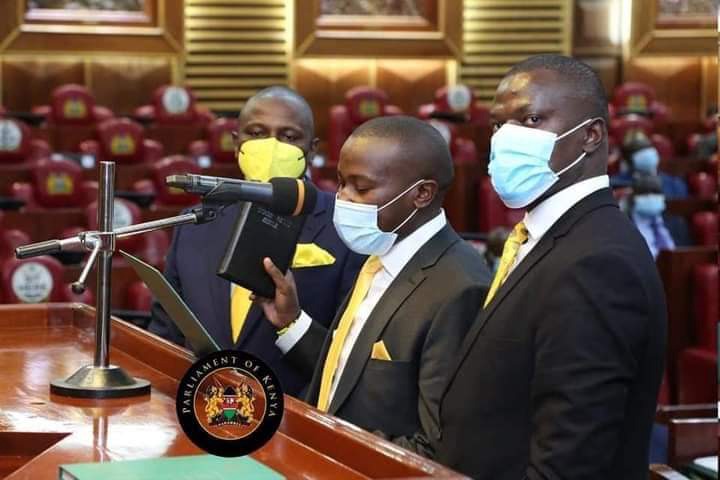 He has the advantage of being in hustler movement and enjoys the support of Deputy president William Ruto and his allies.

For Damaris Waiganjo, she a youthful political newbie,taking advantage of the support of experienced political heavyweight, the likes of Kiambu Governor James Nyoro and gambling out his luck in the marky fields of Kenyan Politics.

May the best candidate win!

Who do you think will win the Kiambaa Parliamentary Race. Leave us a comment.

Tell us which Race you would like us to write about next.