Junet Mohamed and Raila Odinga, a Long History of Friendship and Loyalty

By KenyaBroadcast (self meida writer) | 25 days

National Assembly Minority Chief Whip and Suna East MP Junet Mohamed is one of the most trusted lieutenant of Former Prime Minister Raila Odinga. Junet Mohamed does not shy from making his loyalty to Baba as common knowledge. A photo has emerged online showing when their relationship started and it has been a Journey. 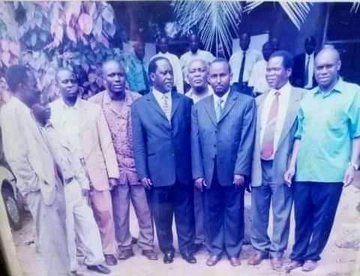 Right Hon Raila Odinga then Minister of Roads, Public Works and Housing in 2004 with the then Migori Mayor Junet Mohamed, Raila nominated Junet as Councillor in 2002 at 24 Years having been deep in Narc Campaigns, It's been a long history of Friendship and Loyalty.

Junet Mohamed attended the University of Nairobi where he earned his degree in Business Administration. He was first elected to the Suna East MP in 2013. He is known for being the first Kenyan Somali to be elected as a Member of the National Assembly in Nyanza Province.