Raila Odinga has scaled up his efforts to make sure that he succeeds President Kenyatta after the coming August general election.Raila is going for the fifth attempt that has now seen him get the overwhelmingly support from President Kenyatta.

Raila's allies have spread their wings in Campaign for their boss across different parts of the country.Today,Martha Karua and the Azimio allies were campaining in Nairobi county.On the other hand,Raila Odinga,Kalonzo Musyoka and other brigades were in Luo Nyanza backyard. 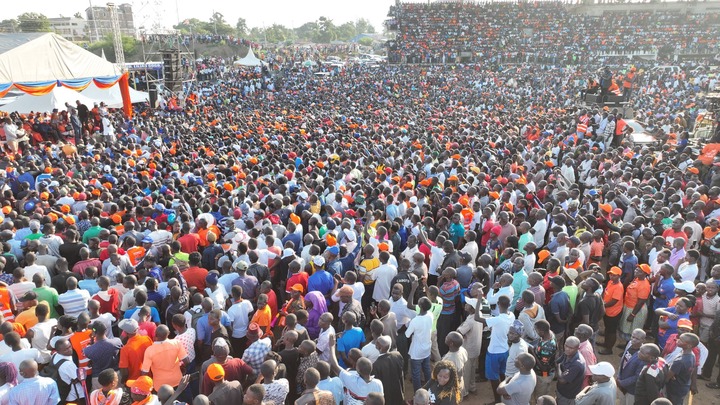 While in Homabay County,leaders faulted Ruto for undermining his boss with today's news about how Ruto nearly slapped Uhuru dominating the campaings.Raila climaxed up his rally in Homabay town after series of Rallies in Oyugis and other places.

The rally was in deed well attended by the residents.The region that has over 400,000 voters has been voting for Odinga 90%.Seemingly,the region has set the tempo as described by Odinga.Following the mammoth crowd, Odinga now believes that they will win in round one.Do you believe so?