State open for Dialogue with Somalia on border

By Wil.com (self media writer) | 3 months ago 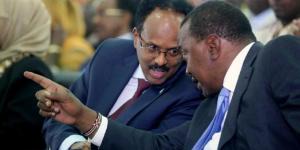 Kenya says it will not yield an inch to Somalia out of the International Court Justice's judgment but it is open to mutually negotiate on the contested maritime zone. Senior government officials explained that following the stand by President Uhuru Kenyatta, in reaction to the International Court of Justice judgment they will be waiting "for things to cool down" to decide on what happens next.

The president rejected the judgment and pointed out that Kenya would pursue the maritime dispute through the African Union, a position taken by Kenya in court that Somalia should allow an out of court settlement arrangement.

"International tribunals have jurisdiction only to the extent of consent by aState.At the outset, Kenya wishes to indicate that it rejects in totality and does not recognise the findings in the decision.

"The decision embodies a perpetuation of the ICJ's jurisdictional overreach and raises a fundamental question on the respect of the sovereignty and consent of States to international judicial processes" Uhuru said.

In reaction to the judgment, they maintain that Kenya will not yield and the dispute can only be resolved through mutual consent by the two.

"You remember what the president said. The government's position remains and it is only the govern ment which can decide otherwise," the official said.

Uhuru said that he will hand the country to Kenya's fifth president while intact.

"Fellow Kenyans, when I became President on April 9, 2013,I took an oath to protect the territorial integrity of the Republic of Kenya. I do not intend to abrogate my solemn oath; and, I will do everything possible as President and Commander-in-Chief, to preserve the territory of this our great Republic and bequeath the same," he stated.

The second official said: "it is important to emphasise and reassure the Kenyan citizens that the country's sovereignty is not threatened at all nor will it be altered as a result of the court's decision.The case, in particular, is aligned to the country's sovereignty and territorial integrity. " Kenya is aggrieved that Somalia is emboldened by the fact that it has friends of Kenya' on Mogadishu's list of those who have purchased oil wells in the contested area for exploration.

”It’s My Time To Pass The Mic”, Jalang’o Announces as He Plans Retire From Radio And Television.

"I Supported Raila But I Realized He Doesn't Love God ," Ruto Says As He Asks Kalonzo To Join UDA